Dragons: Why Can’t We Have Them?

Winter is here, at least by Southern California standards, but Game of Thrones is most certainly not. New episodes for the final season are at least a year away, and there is another winter still to come until the show’s three (-ish) iconic dragons return to dominate the airwaves. In the meantime, fans at UC San Diego might have noticed that dragons do not appear in the natural world. 2017 was one of the hottest years on record, but exactly 0% of that heat could be attributed to dragon-fire. This raises the question, particularly to astute students of biology: why exactly do we not have dragons?

Here we will examine a few biological barriers that would limit the existence of dragons as they are depicted in popular culture. In the process, we will sketch out a natural history for how they or a similar species might have evolved and lived their lives. 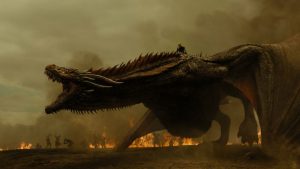 Drogon, pictured here razing a battlefield, might be considered a “wyvern” because he only has two legs and wings, but the distinction is often ignored. Since all land vertebrates are descended from four-legged tetrapods, “wyverns” are much more evolutionarily feasible than their six-limbed counterparts. (Image Source)

The Problem with Metabolism (and What it Means About Anatomy)

“Warm-blooded” endotherms are allowed to maintain aerobic lifestyles around the clock, and some of them have evolved powered flight. “Cold-blooded” ectotherms do not do that, so their bodies have more energy and resources for growing a lot larger, and they can keep their scales. This raises several problems. If we start with a scaly lizard, we obviously have an ectotherm. If we want it to be an active, ferocious predator, and if we want to give it any hope of being able to fly, then we need to rewire that lizard’s anatomy and biochemistry to make it an endotherm. Unfortunately, this also makes it furry, since insulation is a key component of warm-bloodedness. Finally, if we want our “dragon” to look anything like the mythic beasts we watch and read about, we need to make it big. This both makes it more difficult to fly, since it means more mass to get off the ground, and also drains nutrients that are already being burned by its warm-blooded hardwiring. 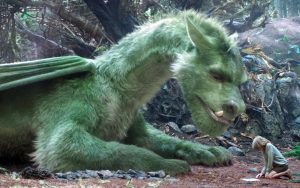 Insulation, like fur or feathers, enables endothermy by retaining body heat. As a dragon becomes larger, however, its volume expands faster than its surface area, meaning that it loses less body heat relative to the heat it generates. Adult animals, therefore, need not be consigned to the cuddly physique depicted in Pete’s Dragon. Dragon offspring, however, might hatch with a warm covering of feathers. (Image Source)

How do we keep a dragon’s heart pumping? One strategy is to decrease its energy expenditure. Real species often achieve this by hibernating: when conditions turn harsh, these animals assume a comatose state and their metabolism is drastically reduced, causing their energy expenditure to plunge. Interestingly, long periods of dormancy are a pillar of dragon legend—consider the rarity with which Smaug leaves his mountain lair to wreak havoc on the characters of The Hobbit—so hibernation may not be far from what myths have already established.

Hibernation alone would not be enough; during its active time, a dragon would need another strategy to increase its energy and nutrient intake. This probably means maximizing the success of its hunts; however, there is one other way to enhance nutrition, one that our own species has mastered. Humans cook their food with extreme heat, effectively outsourcing part of digestion and allowing us to take greater advantage of food’s calorie load. To remain big and airborne then, our dragon would require a mechanism to make it a spectacularly successful hunter as well as an adequate cook. Breathing fire would achieve both, but how might this be physiologically possible?

The Problem (and Possibilities) with Breathing Fire

Some species, including yeast and goldfish, are able to ferment sugars in the absence of oxygen to produce ethanol. A dragon could, presumably, have a gland where ethanol fermentation is carried out. This fuel could be expelled from its mouth similar to how some cobras are known to spit venom. The trick is creating a spark in order to ignite the fuel: a specialized bone attached to a very powerful muscle might do the job. Otherwise, a dragon might need to ingest stones from its environment to serve as a flint. Either way, it is unlikely that fire-breathing would be inexhaustible; periodically, the flint or the fuel would both degrade or run out and need to be replaced. So, dragons would need to ration their fire-breathing.

The benefits of breathing fire, however, would be immense. Consider that mastery of fire transformed early hominids into the world’s most powerful predator overnight, and because it enhanced our nutrient uptake, it allowed our brains to become much more powerful. Likewise, fire could be the key in enabling a dragon to be huge, endothermic, flight-ready, and maybe a little intelligent too. Given this, let’s trace out two possible explanations for how dragons might have evolved.

In the first, let us start with an ectothermic lizard that evolves the ability to breathe fire. Initially, fire might be more useful for attracting mates or intimidating rivals, but it is quickly adopted into a hunting tactic. Cooked, plentiful meals mean more energy, which the lizard’s descendants convert into a larger body and a faster metabolism in order to become even more effective predators. The ability to jump further, and eventually fly, is selected for due to its usefulness in setting fires and pursuing prey.

Alternatively, we could start with a small, flying endotherm, much like a bird or a pterodactyl. Over generations, it becomes larger in order to take advantage of dense prey populations. As it grows in size, its body loses relatively less heat, so it might be able to shed its fur or feathers and regain its scales. Because flight mandates having hollow bones, these animals would need to avoid bodily confrontations. Fire-breathing might be a solution to slaughtering prey without engaging in a physical struggle. Then, there is another evolutionary impetus to become larger, since larger dragons can sustain greater flames and take out larger prey.

The existence, then, of a dragon-like creature is within the realm of possibility. Once a dragon has evolved, however, its survival in our world is much more problematic. 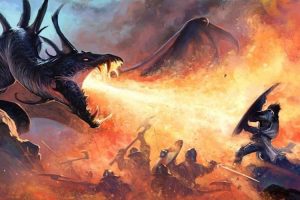 Breathing fire would have made dragons virtually invincible in combat, but Homo sapiens would hold the upper hand when their enemies were hibernating, and the beasts’ ability to defend themselves would have been crippled once their ethanol reserves were exhausted. (Image Source)

The Problem with Ecology, and People

Since all species influence their ecosystem, we must consider that a world with dragons would be significantly different in many ways. For example, we can assume that dragons living in the recent Ice Age would feed on megafauna, such as wooly mammoths. These animals are huge and live in large herds that are easy to locate, so hunting them fits in conveniently with dragons’ hibernating lifestyle. Because we presume dragons exist, and have evolved over millions of years to hunt megafauna, species like the wooly mammoth are adapted to survive in the presence of flying, fire-breathing monsters. This means that when bipedal, fire-wielding monsters arrived out of Africa, as humans did in real life, they might find the megafauna more difficult to wipe out than they would in a world where dragons did not exist.

This sets up the world for a competition between dragons and Homo sapiens: two alpha-predators, one possessing fire as a cultural adaptation and another as a physiological mechanism. A dragon could easily annihilate one human being—but then again, so could many, many other animals. Ultimately, early Homo sapiens as a species would have had the upper hand in an interspecies conflict, and this is because dragons are unlikely to have a knack for social coordination.

Because they must consume an incredible amount of resources, a single dragon would need to defend a massive territory from other dragons, making them unlikely to socialize. They would probably raise very few offspring, since an overpopulation of dragons would literally set the world ablaze. Due to their predatory prowess, dragons would have felt little need to coordinate with one another while hunting. Homo sapiens, on the other hand, are stupendously adept at working together. Although it would have been a dangerous and costly affair, our ancestors could collectively target dragons while the creatures were hibernating, or when their ability to breathe fire was exhausted.

Humans and dragons, however, would not need to have come into direct conflict in order for one to wipe the other from the face of the Earth. Consider the real ecological history of our planet: as our ancestors spread across the globe, megafaunal populations evaporated. Humans first reached North America 12,000 years ago, by which point they had annihilated large mammal species across Eurasia. If any Old World dragon species existed, this is when their food source would have been eliminated. In any case in which we existed, dragons would have starved to death many thousands of years before medieval, Game of Thrones-type societies ever sprang into existence.

This brings us to the end of this exercise in speculative biology. As we have seen, it is possible to reconcile several apparently contradictory aspects of dragon anatomy, and it is far from impossible to envision a mechanism for breathing fire. Ironically, the major factor preventing dragons from existing on our planet is not a biological barrier, but the fact that this is our planet, a world which we have already rid of countless spectacular species. 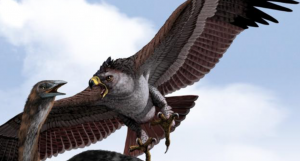 Haast’s eagle had a three-meter wingspan and inspired the Maori myth of Te Hokioi, a giant man-eating bird. It went extinct within generations of human colonization of its native New Zealand. The Polynesian settlers did not directly attack the animal, but exterminated its food source, the moa. A similar fate would have befallen dragons. (Image Source)