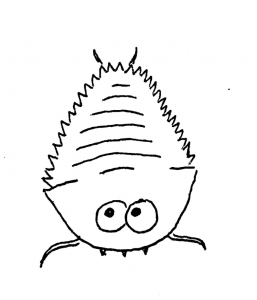 How an Ancient Molecule Opened Our Eyes

Personally speaking, I have reached both that time of the day and that time of the year when I would really like to go back to bed. Unfortunately, I can’t quite do that; with impending exams, papers that are due, a social life that I should supposedly be doing something with, various responsibility things, and the fact that I am now starting to write this blog when, I believe, the deadline was two days ago, there are things that I have to do which necessitate not sleeping the entire day. Being sentient, sadly, requires being awake.

It would have been much nicer, some might argue, if so-called intelligent life had made the intelligent decision to not evolve, thereby not inheriting those responsibility things. As I hope these articles have shown, we never really had that choice, because, for our ancestors, the choice had to be made between some new-fangled adaptation or death-by-Tyrannosaur/desiccation/freezing/starvation/saber-toothed cat. Approximately half-a-billion years ago, however, evolution, as well as life in general, proceeded at a much more comfortable and relaxed pace. Our ancestors had time to mull it over and possibly decide against ascending the ladder of life altogether. Some upstarts ruined this primeval Eden, however, by making the same silly mistake I made this morning: opening my eyes. 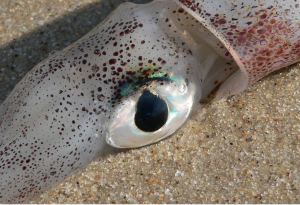 Darwin, as you might recall, was terribly troubled by any natural phenomena that seemed to contradict his theory of natural selection. The apparent hyper-evolution of flowering plants was one example. Another was the existence of the human eye. The problem was that the product of evolution–in this case, an eyeball–integrated various components that were, by themselves, entirely useless. To see properly, we need a lens to focus light, a retina to receive images, and an optical nerve to funnel information to the brain, among various other components. How did the final functional unit, an eyeball, evolve if the intermediate evolutionary adaptations did not help anyone survive or make children?

Here’s the thing: it’s not hard to find simpler, less-evolved eyes that still function perfectly fine; you just need to look around the animal kingdom. Once you’ve found such eyes, it is not at all difficult to imagine that advanced vision might have arisen from these more primitive models, but try explaining that to the various creationist websites claiming intelligent design that I sifted through while pulling sources for this article.

There’s much more explicit evidence for the evolution of vision. Consider opsins, which are the pigments that allow us to see. These molecules reside on the surface of photoreceptor cells–think rods and cones–in the retina, and when they are struck by light they initiate the cascade of chemical reactions that we perceive as vision. Opsins are very, very old. We can surmise this because they are found basically everywhere, from the nerve nets of sea jellies to retinae of great apes and octopi. That is an indicator that they evolved extremely early, potentially during the genesis of the animal kingdom. 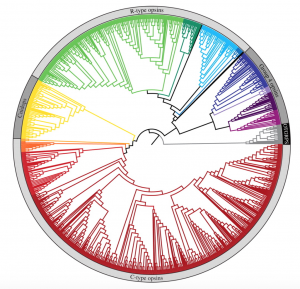 There are many types of opsins, all likely descended from a simple signaling protein that studded the cell membrane of some primeval protozoa. The visual systems of vertebrates mostly use C-type opsins. Cones use different opsins for different colors, and rods use another type of opsin for vision in dim light. (Source)

The genesis of the animal kingdom, as you might guess, happened a very long time ago. Animals first appeared during the Ediacaran Period, an age so ancient that it is technically not in the same eon as anything that this blog has ever discussed. Dinosaurs, humans, fish, insects, flowers, all plants for that matter–in fact, all forms of complex life–evolved in the Phanerozoic Eon, which began 542 million years ago, when the Ediacaran Period ended. The things that lived during this time, for the most part, were worms and sea-jellies, but even these animals possessed the precursors to vision as we know it today.

These precursors were not much to look at. Ediacaran worms had “eye spots,” which are clusters of opsins that could inform the organism about whether they were in the sunlight or not. This alone was not particularly useful knowledge, especially if that worm had no way of knowing where that light was coming from. Later on, however, those eye spots became surrounded by a groove or indentation, which allowed the organism to sense the direction of incoming rays. This in turn enabled it to swim toward sunlit waters, and whatever edible things were growing there. In ensuing generations, the pit became deeper and the photoreceptors assembled into a retina, while a neural network evolved in order to process images.

One key step remained in the development of a spherical eyeball: the lens. Your eye lens is filled with proteins called crystallins. As far as molecules go, few manage to do more than crystallins while also being transparent. Crystallins can bend light, thereby focusing an image on the retina. In other environs, they can help to prevent overheated proteins from breaking down, and they can do all these wonderful things for decades, considering that crystallins never really degrade. That is the reason that, as we grow older, we often require cataract surgery; otherwise invisible crystallins clump together and come back to wreak vengeance because you never appreciated them for how amazing they were. 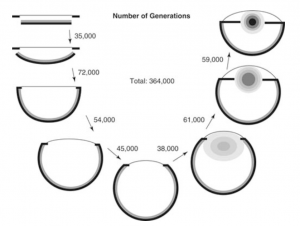 Under the assumption that every generation of marine organisms bred once per year, models predict that complex, “camera” eyesight could have evolved in less than half-a-million years, which is pretty astounding. (Source)

Crystallins likely originated as heat-shock proteins–they held kept other proteins from falling apart when it became unpleasantly hot. When those primordial worms evolved an eye-pit, however, crystallins were reassigned to a lens, where they just happened to be useful. Subsequent generations would whittle crystallins into proteins that were better adapted at bending light. Meanwhile, other mutations were at work curving the lens in order to produce a sharper, clearer image. The ancestors of those worms not only had a clearer image of whatever was around them, but thanks to crystallins, they could focus on predators or prey regardless of whether they were close by or far away.

If none of those adaptations sound too complex, that’s because they actually weren’t. Some snazzy modeling of genetic and biochemical processes have shown that a simple patch of opsin-coated cells could have evolved into a complex, lens-equipped eye in only 364,000 years. One more time, for emphasis, in case that didn’t really click: the animal kingdom could have gone from total blindness to enhanced vision in well under half-a-million years, a blink of geologic time, about how long it will take for UC San Diego to construct a parking lot. As you might imagine, such an abrupt adaptation, and one that happened across the animal kingdom, probably had a pretty colossal impact. 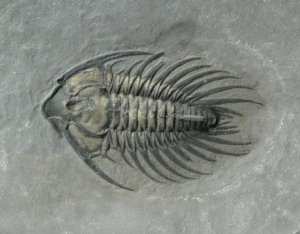 Trilobites were among the earliest species to evolve eyesight to its complete advantage, diversifying into many thousands of species and thriving for the duration of the Paleozoic Era. In the modern day, I can’t be bothered to clean my glasses. (Source)

If you’re ever given the option of losing either your vision or your hearing, or, for that matter, your vision and any other sense, immediately forfeit whatever sense it was besides vision. It isn’t so much that your life will probably be better if you never listen to another Drake song, but it’s that, especially from an evolutionary vantage point, vision is much, much more useful. Put yourself in the place of a trilobite that has evolved eyesight and finds itself on the sunlit seabed of the Cambrian Period, at the beginning of the Phanerozoic Eon, about 510 million years ago. Suddenly, you are able to see things that can eat you, and swim away from them. Not only that, but you can also spot things that you are able to eat, and can swim toward them. As if that were not enough, you can indeed see that stunning lady trilobite, and swim toward her. Compared to every other sense, vision provides a much greater competitive advantage.

This might explain why vision evolved during the finale of the Proterozoic Eon or; or why the Phanerozoic Eon began almost as soon as vision evolved. Roughly 550 million years ago, the fossil record suddenly became substantially larger, in an event termed the Cambrian Explosion. Out of seemingly nothing, almost every animal lineage appeared, in addition to numerous other bizarre taxa, the evolutionary fates of which still puzzle paleontologists. We saw the first “body plans,” such as mollusks, arthropods, and vertebrates. Many scientists interpret this as the beginning of an evolutionary arms race–predators became more ferocious, and prey became more armored or more fleeting, and each invested in new adaptations. That arms race has continued largely unabated until this day.

What triggered this? Let’s revisit our trusty trilobite, who is scuttling hesitantly along as he scans the perilous Cambrian shoreline with his flashy new eyes. Vision not only enhances the trilobite’s own fitness, but it also imperils that of its prey, which must evolve new means of evading it, and it also imperils that of its predators, which now must enhance their own hunting capabilities. Bestow vision on numerous aquatic species, and now there is a powerful, persistent impetus to evolve and keep evolving. In a couple hundred million years, those animals that just evolved a backbone will splash ashore, and a couple hundred million years after that they will generate warm blood and mammary glands. Not long after that, some of those vertebrates will wander the African plains on two feet, and soon one of them will be pleasantly reminded by their manager that their blog was due two days ago. 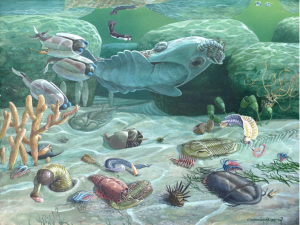 The originators of eyesight would have spent some time wondering what the **** they were seeing. The Cambrian seabed was populated by some of the strangest specimens known to science, as well as the earliest vertebrates (with backbones), arthropods (with exoskeletons), and mollusks (with shells). Each of these body plans could have originated as solutions to the intense competition that being able to see generated. (Source)

Let’s look at this another way; life originated about 3.5 billion years ago. During those first three billion years, life didn’t really do anything (unless you’re really excited by algae). Then, after the Cambrian Explosion, evolution dramatically accelerated, generating the basic body plans that, in the ensuing 500 million years, branched into the entirety of the animal kingdom. Life as we know it didn’t kick into gear until the final seventh of biological history. You could reasonably blame the fact that it ever kicked into gear at all on the inception of eyespots and the involved protein pigments in the waning Proterozoic Eon. The miracle of vision, as it turns out, is far from proof of intelligent design–not only was it created by evolution, but to some extent, vision created evolution.