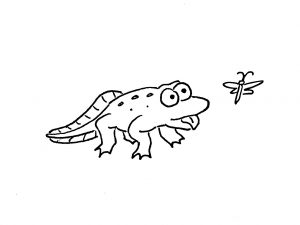 How Pioneers Left the Primordial Ocean to Colonize the Continents,

And Ended up Bringing the Waters There Too

Another quarter, another episode of watching the floodwaters rise from the toilet, spread through the restroom, seep through the wall, and soak the carpet below my suitemate’s bed. If anyone from Housing Dining Hospitality happens to be reading this, I would like to kindly remind them that my suitemates and I are, in fact, terrestrial animals. This has been working out pretty well for us, and nothing from El Niño’s gargantuan storms to Sixth College’s plumbing problems will change that.

My toilet might be confusing the present for a time hundreds of millions of years ago, when not only my suite, and not only Southern California, but all of life lived contentedly in the ocean, and the ancestors of my suitemate and myself swam around like primordial Pac-Men. At some point, those ancestors found it fit to wade ashore—probably not so much to devour terrestrial cherries, but to escape aquatic ghosts. What ensued was a struggle to adapt that spanned the evolution of multiple clades and remodeled almost every aspect of the animal kingdom. 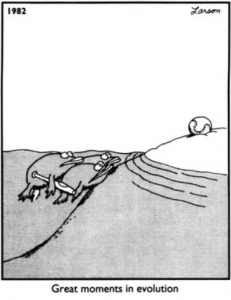 This probably did not happen. (Source)

You would be forgiven for having forgotten that what we fondly refer to as dry land is, from a biological perspective, essentially hell on Earth. It was even more so in the Late Devonian Period—about 365 million years ago—when the first vertebrates began their colonization. Not only was this new land scant in oxygen and awash in radiation (relative to beneath the waves), but the dry air constantly sapped water through their soft skin and the great force of gravity tried to smash their skulls against the barren Earth. Imagine having to evolve to live inside York Hall the first week of the fall quarter, and you might get a good picture of the agony our ancestors experienced.

It is into this inhospitable world that the panderichtyids—a now-extinct breed of bony fish—made a splash. I realize that we at UC San Diego don’t get to talk about fish nearly as much as we all secretly want to, so let’s touch on two noteworthy members, the coelocanths and the lungfish, two relatives of the panderichtyids that have managed to survive the maelstrom of geologic time. 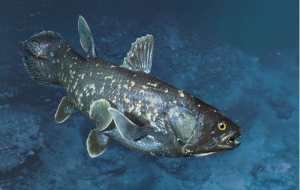 Coelocanths were believed to have gone extinct with the dinosaurs until a bemused fisherman pulled one out of the ocean in 1938. As a lobe-finned fish, the coelocanth and its Devonian counterparts were not too far off from evolving limbs. (Source)

Coelocanths arose in the Devonian Period and, rather than make their way landward, evolved in the opposite direction, toward the deep sea. While our ancestors were desiccating up above, the coelocanths were doing just swell, and one was spotted swimming down there as recently as 1987. What we observed was that these fish, close relatives of the panderichtyids, move their front and back fins the same way a tetrapod (that’s a four-legged land animal) would move its legs.

Lungfish, meanwhile, went in the same direction as the panderichtyids, and you can still find them wallowing about in shallow, stagnant ponds in the Southern Hemisphere, regretting their decision not to follow their coelacanth cousins. Lungfish have—get this—a lung, which allows them to gulp in water from the surface when oxygen is especially hard to find.

The panderichtyids likely had features of both the coelocanths and the lungfish. In addition, they were the only species of fish to have a frontal bone—in other words, a forehead—a feature of all terrestrial life. They also had a flattened body and eyes on the top of their head—a lot like a crocodile. This suggests that they might have lived in freshwater ponds, which teemed with algae during the Devonian Period and, because of this, were particularly oxygen-barren. In other words, the environment that the panderichtyids found themselves in was not a lot better than what they were about to head into.

Fish out of Water 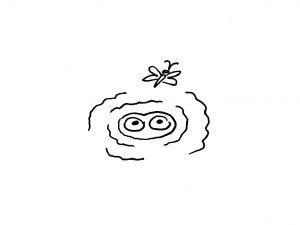 Let’s visit prehistoric Greenland: during the Devonian Period, it was on the equator and was actually green, at least along riverbanks and the shoreline. This is where Ichthyostega splattered ashore, likely feeling pretty accomplished. Ichthyostega was about a meter long, with a flat body and a long, fish-like tail. It had fish scales along its stomach but none along its back. Its four limbs—the pride and joy of its anatomy—were virtually the same as yours or any other modern terrestrial animal’s, having a forearm, humerus, wrist, and fingers. Its skeleton was also bulked up to protect its backbone and internal organs. In Ichthyostega, the panderichtyid fish had launched the first amphibian—the clade that took the vertebrates onto dry land (and sort of went downhill from there).

You likely know amphibians as frogs and toads, those charismatic characters that can be heard croaking behind the foliage as you enter Scripps Coastal Preserve, waiting for their chance to make Amphibia great again. In terms of anatomy, today’s amphibians have very little to do with Ichthyostega, having evolved hundreds of millions of years later. They do, however, share one pretty important similarity: they are able to, and more often than not are consigned to, spend a sizeable chunk of their lives in the water.

For Ichthyostega and other Devonian amphibians, it would have been fortuitous to spend as much time out of water as possible. Even though the land was uncomfortable, especially for a fish, at this point in geologic time it was pretty empty, except for some small plants and invertebrates. The water, on the other hand, was the set of a prehistoric rendition of Jaws, a bloodbath of ferocious fish that were, to say the least, butt-hurt at being left behind.

Ichthyostega was not only the earliest amphibian and progenitor of the tetrapod lineage, but it likely also led a much more action-packed life than you do. (Source)

Ichthyostega needed to go back regularly to hunt and to keep its skin sufficiently damp. But the land was a safe and convenient spot to sunbathe and have sex, which Ichthyostega probably did a lot of, considering the abundance of fossils found. It also would have made sense for the first amphibians to waddle onto land so that they could lay their eggs in isolated ponds (like those that the panderichtyids might have evolved in), where there were fewer predators. The theme of moving onto dry land, in case you haven’t yet surmised, was not so much a preordained leap for the animal kingdom, but a scramble to escape the undersea chaos and strike it out for a less competitive, albeit physically harsher, environment.

One more time—let’s recap on what sucks about living on land, given that you are an ancestral amphibian.

Kudos to amphibians, who evolved some solution to all but the first two of these challenges (we don’t have the blog space to delve into all of these adaptations, but suffice to say I’m still not very satisfied with their solution to number seven). Unfortunately, fish scales weren’t very useful for retaining water—which makes up a whopping 98% of your body—and amphibians quickly lost them anyway. Also, in order for their offspring to have any chance of survival, Ichthyostega had to lay its eggs in the water, surrendering them to whatever was lurking down there. 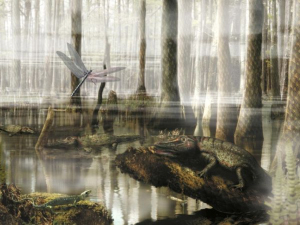 The Carboniferous swamp forests, which saw the evolution of the earliest reptiles as well as dragonflies the size of seagulls, among many other mega-arthropods. Hylonomus is depicted in the bottom left, while modern day fossil fuels are depicted everywhere. (Source)

Dry land, as it turns out, was never truly conquered until the evolution of Amphibia 2.0, or the reptiles. This happened during the Carboniferous Period, which followed fast on the Devonian and saw the craze for life on land intensify. The earliest true reptile that we know about was Hylonomus, a tiny lizard that scurried through Carboniferous swamp forests that one day would form the bulk of mankind’s fossil fuels. Hylonomus had scales, which solved the problem of desiccation, meaning that this lucky lizard did not need to consistently lubricate itself in the dangerous swamp pools. Of even more profound importance, the embryo of Hylonomus had an amniotic membrane. Also known as an amnion, this bag of water came with several other membranes and a yolk sack, all bundled inside a sturdy egg shell.

“Amnion” sounds like a sleeping medication, but its evolutionary purpose was to provide an aquatic environment for the embryos of decidedly non-aquatic organisms. In effect, our ancestors took a small, safe piece of the ocean onto dry land for it to nourish their young. Reptiles and their progeny could plop their eggs down in any secure location—potentially miles from water. The amnion was such a revolutionary biological invention that even human embryos come equipped with them, although inside of our womb they are more useful as a cushion than as a source of hydration. 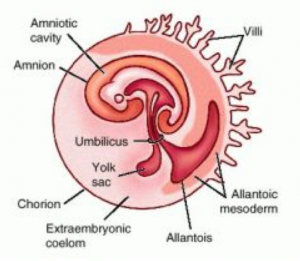 The amniotic egg, as it still appears in human embryos. The amnion, the innermost membrane, cushions and hydrates the embryo. Two other membranes also play an important role: the chorion, which exchanges oxygen and carbon dioxide, and the allantois, which stores waste products from the embryo. (Source)

Conquering the continents above the waves was no easy feat—in fact, it was a series of interrelated feats—and even Ichthyostega would have felt more at home in my flooded Sixth apartment than on anything that could pass for dry land. As in all evolution, behind the travails and triumphs of animals like Hylonomus and the conception of traits like the amnion was an eternal, primeval urge to get away from whatever frightening monster was out there, particularly what was underwater. The next time you look to the wide Pacific and feel just a little bit uneasy about going in for a swim—or, for that matter, the next time you consider dropping a class—take comfort in the fact that you are following in the glorified evolutionary tradition of running away from things that scare you.