Welcome to the Polar World

There wasn’t any wind whipping around to bite at the exposed skin on my face, but the chill that rose from the packed snow was enough to keep my cheeks and nose red. Patrick and I waited outside the known den of a mother polar bear for about two days. We camped behind some snow dunes to give the large bear enough space with her cub (or cubs – we weren’t sure yet). This particular female had been tagged almost five years ago to gather data about roaming patterns, hunting frequency, and maternal behavior. Three years ago, she had given birth to one male cub. Now, we were waiting to witness her new litter.

The research team that had tagged her was worried because she hadn’t emerged yet. This mother had gone into her den in November prepared to live off of her fat reserves until her cubs were ready to face the world. Once she emerged, it would be very important that she start hunting so that she could provide enough milk for her young. However, for the past few years, sea ice in the arctic has been melting away earlier in the year, so by late April and May, there would not be enough to provide hunting grounds where polar bears can find seals.

So Patrick and I were crossing our fingers one morning; it was about 6:40 AM and we finally saw some promising movement in the snow near her den. I watched through the zoom on my camera as a large white paw came out of the snow, digging through to create an opening. Once a large enough hole was made, she brought her entire 500-lb body into the open. I could see each of her huffing breaths forming, curling condensation in the cold morning air. After a few moments, a smaller paw hesitantly made its way through the hole, and I had to forcefully hold my composure and silence when a polar bear cub emerged from the den and another one followed. 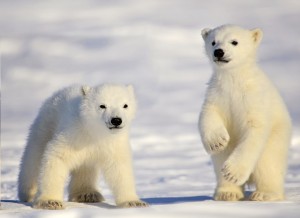 The twins had wobbling feet that slowly took steps toward their mother, all the while making squawking noises to call for her. These cubs will stay with her until they are 2½ years old, learning to hunt and survive in the harsh habitat of the arctic. The mother was rubbing and rolling through the snow, waiting for her cubs to come to her. They slipped over the snow, carefully climbing the steeper portions until they reached her. She made herself comfortable on her back, offering the cubs a meal of milk. “The cubs will nurse for about 30 months after birth,” Patrick had whispered to me as he clicked away on his camera.

Polar bears are built for their frozen environment, but a lot of their success is due to the high-calorie diet they’ve adopted. Seal fat is a major component that allows polar bears to maintain their own layers of fat. I remember on my last trip to the arctic region, I had the opportunity to watch a female polar bear hunting on a large ice float. It had found an opening in the ice, called a lead, where seals would come up for air. It had waited patiently for a seal to pop out for some air, and when the seal did, the bear swiftly plunged her face into the water to clamp her teeth onto the seal. She had missed and did not find food for another day or two, but the scene was one I don’t ever want to forget. 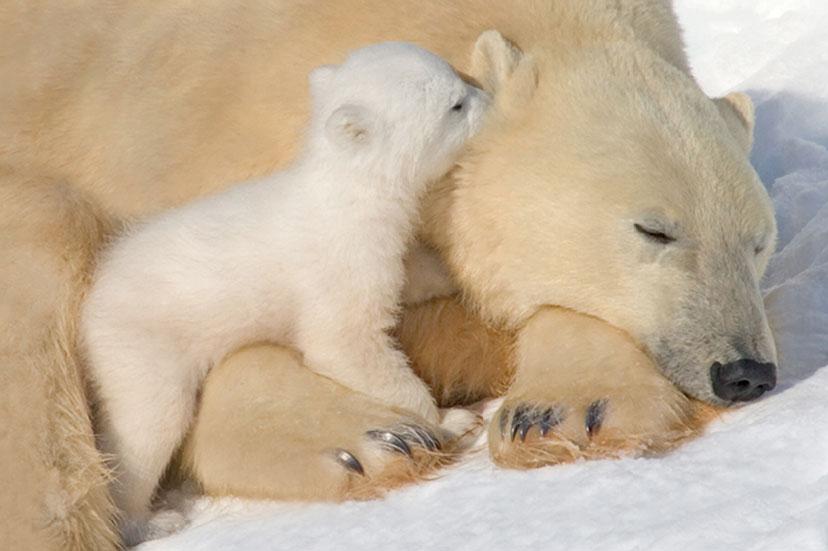 That day with the cubs, Patrick and I didn’t say anything for almost two hours as we watched the mother polar bear playing with her cubs and helping them strengthen their legs. We would have to come back in a few weeks with the research team that had tagged the female to identify the sex of each cub. They might even begin tracking them to continue collecting data in future generations. It was vital to conduct this type of research because of the shortening hunting season all polar bears face due to melting sea ice.

Adaptation usually involves a population changing their behavior over many generations as their environment slowly changes around them. However since global warming is causing trends seen within a single decade it is important to learn more about how the polar bear is changing its behavior to compensate for its rapidly fluctuating habitat. With climate change in front of us we can only hope that research will keep us in sync with any population changes. I really hope that the polar bear is able to bounce back though, because I don’t want to imagine a world without them.