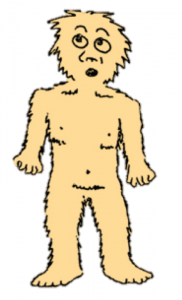 How A Novel Adaptation Lifted Mankind onto Two Feet and

Changed the Trajectory of Human Evolution

This year, approximately four million babies will be born in the United States. Given that these are human babies, we can predict three things. First, the vast majority will soon be walking on two feet. Second, they will have caused their mothers a great deal of misery while en route into the world. Third, they will be members of the most intelligent species on the planet.

Given that these are American babies, we can also predict that 42% of these very intelligent babies will become creationists. Sadly, these particular babies will be lost to the interrelatedness between the first three things we observed: the link between two feet, excruciating births, and big brain capacity. They will also be ignorant of myriad other phenomena underlying our living world. If creationism offers them an explanation, theirs is undoubtedly less epic than the biologically-driven saga of macroevolution, a 3 billion-year wave of monsters and mayhem that has washed us, and every other organism on this planet, into the present day.

Every two weeks, this blog will look at a unique evolutionary hurdle and see how some species, somewhere, at some time was able to clear it. To start off, we’ll see why bipedalism — that’s walking upright, on two feet — is inextricably tied to other defining features of mankind, like big brains and bloody births. It is an interconnectedness born out of a dusty savanna and a dying woodland, 4.5 million years ago. 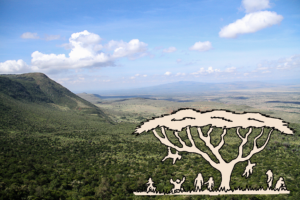 The Great Rift Valley in Eastern Africa was the hub of early human evolution. (Source)

Let’s begin with a lab: while seated on your sofa, try to pick the remote off the table and turn on the TV using only your foot (it’s not quite BIPN 105).

You can’t do it, because you lack opposable toes. You’ll have to lean forward and, like a human being, pick up that remote using your hands. The fact is that the human lineage has been hopeless at picking up remotes with their feet for more than four million years. Back then, opposable toes were useful for something a bit more crucial than changing the channel: climbing around in trees.

Ardipithecus ramidus — or, as paleontologists lovingly refer to him, “Ardi” — lived around this time, in the Great Rift Valley of East Africa. Although not the oldest hominid — a member of the clade that culminates in folks like you and me — Ardi achieved fanfare in the paleo-sphere the way most fossils do: by being nearly complete. Ardi’s fossil reveals an ape that could walk around on two legs while also sporting a splendid pair of opposable toes. These opposable toes, unfortunately, were clumsy for walking around with; so as far as bipeds go, Ardi was not the most efficient. In addition, Ardi’s upright stature was not ideal for navigating tree branches. Our primordial pal was stuck at an awkward evolutionary crossroads, which begs the question: what exactly drew Ardi and our other ancestors down from the canopy?

This brings us to…

>Two Common Rationales for Bipedalism that are Totally Wrong:

Nevertheless, keep these debunked theories in mind, since both tools and savannas definitely factor into our evolution later on.

In fact, nobody can nail down what prompted bipedalism, but there is one trend that is worth discussing. Although Ardi’s beloved forest had yet to succumb to open savanna, climate changes were already underway. Africa was drying up and becoming more seasonal, in part due to the steady ascension of the Himalayas, which threw global air currents into disarray. Some anthropologists suggest that our ancestors coped with the harsher environment by forming monogamous relationships. This allowed females to concentrate on caring for the young while males gathered scarce food, confident that their mates would not run off with a random monkey while they were away. While this might sound like the beginning of gender roles, it could also be the beginning of bipedalism: males had to walk upright in order to carry valuable groceries. Chimps have been observed to walk on two legs when they are trying to keep a precious item off of the filthy forest floor, which lends credence to the idea that bipedalism might have originated as a way of delivering food for the sake of pleasing lady apes.

Later, as woodlands withered and our ancestors had to travel further and further for food, bipedalism offered a more efficient mode of traversing open grasslands. Studies show that a chimp placed on a treadmill expends roughly 75% more energy walking than a human, suggesting that bipedalism may simply have been a more energy-efficient means of navigating a changing environment.

In November of 1974, some anthropologists were heading home from a day of fieldwork in East Africa when they spotted a skeleton protruding from the side of a gully. What they eventually unearthed were the bones of a bipedal human ancestor, which came to be known as Australopithecus afarensis. The celebration that ensued that night was likely the most fun that any anthropologist has had in the forty years since. The Beatles belted out “Lucy in the Sky with Diamonds” on repeat, and someone, undoubtedly in a drunken stupor, began to refer to the extinct hominid as the girl in the song. The name “Lucy” stuck. 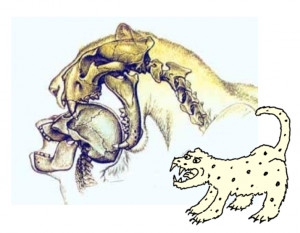 Dinofelis, depicted here eating your great-something-grandparent. Dinofelis was among many threats that devoured, gored, trampled, or tore apart your early human ancestors. (Source)

Bipedalism was solving one problem: how to efficiently cross the ever-spreading savanna and pick up ever-scarcer food. However, it was creating another problem: more difficult births as the birth canal ever-tightened. This conflict led to another unique characteristic of the hominid family: holes in our head. The holes, or more scientifically fontanelles, are present in infants and allow the skull bones to slide past each other during birth. This helps to ease a newborn through the uterus.

This adaptation enabled Australopithecus to roam the savanna upright while not punishing mothers too severely during labor. Keep in mind that Lucy, who lived around three million years ago, lived largely before the tremendous increase in brain capacity that accompanied our evolution. This, as you would guess, would make giving birth a bit harder.

It is an important distinction that Lucy and her fellow australopithecines did spend some of their time in trees. The reason is not hard to fathom: if you lived on the wild savanna, you would probably spend a lot of your time hiding in trees as well. Scientists debate about how often Lucy was arboreal — remember that, without opposable toes, she was no longer very fit for it. Lucy, in particular, might have wished she were a little more like Ardi; recent examinations of her skeleton suggest that she might have died from falling out of a tree. If this is the case, her death might be the most appropriate in the 500-million-year history of complex life on Earth. It signaled the direction of future human evolution: toward the ground.

By 1.5-million-years ago, hominids under the genus Homo had perfected their upright gait and were totally terrestrial creatures. Homo erectus had longer legs and shorter arms, much like we do today, that enabled it to walk or even run long distances. Tribes of H. erectus could follow migratory herds of prey and may have been the first human ancestors to leave Africa, traveling as far as China. Equipped with enormous brains, H. erectus used primitive stone axes and cared for sick and weak relatives, becoming the top predators in their new habitats. Their species lasted until less than 150,000 years ago, nine times longer than our own Homo sapiens has been on the Earth.

The key to Homo erectus’ success as the earliest human was, of course, its brain power. In large part, however, this brain power was owed to the trademark of the hominid lineage: bipedalism, which natural selection had nurtured ever since Ardi dropped out of a tree. There are myriad ways that standing on two legs could have triggered brain development: it let Ardi’s descendants tinker with tools, which would have enhanced those areas of the brain responsible for motor control. A wider range of vision that came with standing upright may have also triggered growth in the occipital lobe. But one more factor needs to be mentioned: the skull-holes, or fontanelles, which evolved as a way to compensate for the burden that bipedalism placed on mothers during birth.

These fontanelles last about a year after birth before they become sealed. Interestingly, it is during this first part of a baby’s life that our brains grow most massively. Contrast this to chimpanzees or bonobos, whose ancestors never walked upright and whose fontanelles seal up before birth. In these animals, our closest living relatives, brain growth occurs almost entirely in the womb and is severely limited by selection because the newborn’s head still needs to fit through the birth canal. Human fontanelles, a gift bequeathed by bipedalism, enable much greater brain development after birth. This could be the reason that H. erectus and subsequent offshoots of the human tree quickly became the smart-asses of the animal kingdom. 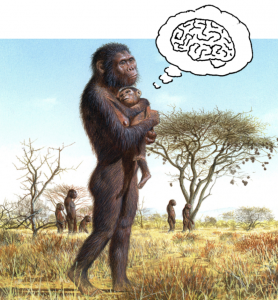 Walking upright let mothers carry their kids. It might also, inadvertently, have let our species develop larger brains. A good reason not to slouch on your way to class. (Source)

Our huge brains, more than any other adaptation, were responsible for propelling humanity toward global dominance. It is interesting to consider that they never would have evolved if not for a much older, much simpler, but ultimately just as unique a trait — being able to walk on two legs. I hope that you found this interesting, and if there are any creationists reading this who think that this macroevolution thing is all hogwash, I hope that we can agree that it is at least entertaining hogwash.

Some sources where you can read more about this:

For those of you, like me, who would rather just look at pictures: