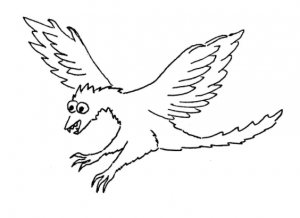 Pieced Together the Foundations for Flight

Birds have it pretty good. It is safe to assume, in fact, that the seagull that discovered your Pines’ stir-fry while you were studying for o-chem is twenty percent more satisfied with its choice of UCSD than you are. It has good reason to be satisfied with its macroevolution as well; members of the class Aves are among the most diverse and successful clades on the planet, numbering around 9,000 species. Some of those species, like crows, rival the great apes in their intelligence. Others, like canaries, can sing better than, say, I can (although, admittedly, so can most of the phylum Chordata). And while humans, for the most part, might hold the upper-hand in cognition and melody, most birds surpass us every time in attempting to fly.

So as that seagull flies off with your stir-fry, think of this circumstance as a culmination of 160 million years of macroevolution. This particular evolutionary lineage has shot birds skyward and kept you consigned to the Earth’s crust, where you wave your textbook angrily over your head. The exact specimen you have to thank for this, however—the animal that kick-started Aves—has been lost in a flurry of feathers from the Jurassic Period. 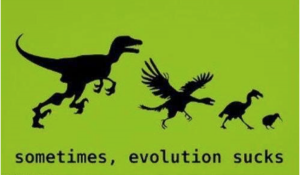 Flightless birds—like the kiwi of New Zealand—evolved in environments where predation wasn’t a real problem. Many flightless lineages may have originated in the aftermath of the mass extinction that wiped out the dinosaurs.  (Source)

The Jurassic Period is famous from Jurassic Park, arguably the best movie of the last epoch. You might remember that the film’s protagonist, Doctor Alan Grant, is a proponent of the theory that dinosaurs evolved into birds. This was a developing idea around the time the movie came out, which is why it causes little Timmy to guffaw. Since that time, however, the fact that birds are just an offshoot of the dinosaur lineage has become all but irrefutable. The difficulty has been in pinpointing exactly where the divergence occurred, and what has happened since then.

Scientists are confident of the general branch that split into Aves. Dinosauria is divided into two groups, based on the orientation of the bones in their pelvis. There are lizard-hipped (or saurischian) dinosaurs and bird-hipped (or ornithischian) dinosaurs. Birds, by the ground rule of biology that life cannot be straightforward, are descended from lizard-hipped dinosaurs. Specifically, they are closest-related to the theropods, a lizard-hipped group that consisted of all the carnivorous dinosaurs, including the Velociraptor and Tyrannosaur stars of Jurassic Park. But paleontologists cannot nail down the missing link between birds and theropods.

We thought we had one in 1861. It was only a year after the publication of On The Origin of Species that Archaeopteryx was unearthed in southern Germany. The finding showed many characteristics of both Reptilia and Aves. On the side of its ancestors, it had a long tail, belly ribs, a full set of teeth, and three claws on each wing. On the side of its possible descendants, the birds, Archaeopteryx had wings, feathers, and a wishbone. The raven-sized fossil quickly became one of the most important of all time, and was referenced by Darwin to support the theory of natural selection. 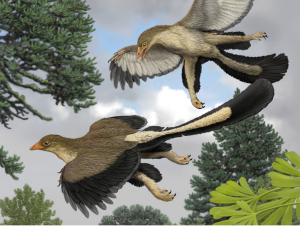 When Archaeopteryx was alive, Europe was a tropical archipelago straddling the equator. The famous fossil, discovered in a limestone deposit, might have formed after the animal sank to the bottom of a lagoon, having found that this new flying stunt did not work very well in water.  (Source)

We have long known that Archaeopteryx was probably a pretty horrible flier. Unlike modern-day birds, it had a flat sternum, which meant that its wing muscles would not have had much to hold onto. Instead, it is possible that Archaeopteryx used its claws to climb up tree trunks. From the canopy, its wings would have allowed it to glide to the ground, a lot like a flying squirrel, snatching flying insects along the way. Alternatively, it might have pursued those same insects by hopping along the ground, using its wings to gain limited lift.

Either mechanism could easily have led to the powered flight of modern-day birds. It is not the reason that paleontologists have begun to doubt Archaeopteryx as being the avian ancestor. Rather, Archaeopteryx’s prominence is probably a result of the fossil record being so sparse at the time of its discovery. Since 1861, many, many new fossils have been unearthed, and the theropod lineage is now studded with contenders for the first bird. While none are particularly better aviators than Archaeopteryx, a few are—and this is crucial—quite smarter.

Birds, actually, are pretty smart. Of course, it varies by species—your uncle’s parrot, for example, is far more intelligent than the ostrich at the San Diego Zoo. The crows you might see flying over Sun God are able

to understand and obey traffic lights better than your suitemate who received a car for Christmas. Aves as a whole, in fact, is a great deal brainier than its reptilian forebears. As possible avian progenitors began to pile up, a team of researchers at the American Museum of Natural History and the University of Texas decided to take a look at how their intelligence compared to one another and to birds of today.

The results weren’t good for Archaeopteryx; while our feathered friend was much smarter than, say, a T. Rex, its cognition was far from bird-like. Examination of its brain-case revealed that the only part of its brain very much like a modern day bird’s was its olfactory bulb, the part used for smelling (note that birds aren’t famous for their sense of smell). 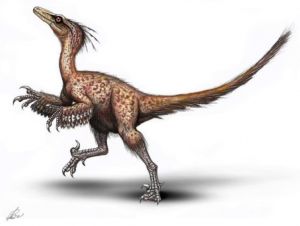 Feathers were probably pretty common among theropods, like Troodon, illustrated here. In addition to staying warm, they might have helped to catch the eye of prospective mates. It wouldn’t be the first time that showing off has changed the course of life on Earth.  (Source)

On the other hand, the study revealed that some theropod species, like Troodon, had highly developed brains. Although they lacked wings, Troodon and similar dinosaurs had evolved many of the other foundations for flight. Arguably the most important of these adaptations were feathers, which likely evolved partly for insulation—the same reason that, at around the same time, mammals were evolving fur. Later, those feathers were necessary for generating lift. Archaeopteryx, for example, had asymmetrical feathers, which enhanced this function. Other features arose too—like endothermy (to be discussed in a future blog post), which would have been essential for any aerobic activity such as flight. Many carnivores’ forearms were also adapting to snatch and hold onto small, furry mammals. This basic motion could have evolved into the flight stroke that kept birds airborne. That’s right: long before that seagull snatched your stir-fry, a Deinonychus snatched your great-(E9)-grandfather Jerry.

In many theropods, this assemblage of adaptations came compounded with huge brains, and hence a highly developed sense of sight and hearing. In other words, the late Mesozoic Era was prowling with small, feathered, warm-blooded, intelligent dinosaurs—any one of which could have launched a flying lineage. 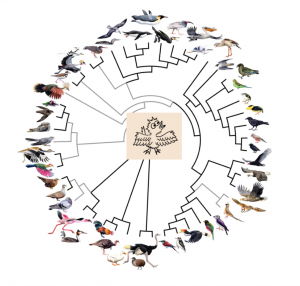 Reaching for the Sky

In 2014, the Avian Phylogenomics Consortium—a global group of biologists who really like birds (and something to consider if medical school doesn’t pan out)—published the results of the most ambitious study ever taken on bird evolution. With the help of nine supercomputers, they sketched the evolutionary timescales of Aves. The findings undermined the belief that birds had diversified during the Cretaceous Period, the time following the Jurassic and just before the demise of the dinosaurs. In fact, almost every modern group of birds originated in less than ten million years following the Cretaceous. The diversity of birds that we are familiar with—from penguins to parrots—is the result of a frantic scramble for niches left open by the extinction of the dinosaurs.

Then what about our many well-qualified candidates for the first bird? It is most likely that there were multiple first birds, each of which evolved from a different theropod species. The Cretaceous skies could have been filled with diverse lineages of primitive, toothed birds, only one of which survived the extinction event at the end of the period. The discovery of the true avian ancestor, therefore, awaits new evolutionary insights.

Birds are, next to mammals, the most successful vertebrate clade of the last sixty million years. They populate biomes, appear on patriotic regalia, scrounge for our food, and have managed to fell at least one commercial airline flight, giving us yet another Tom Hanks movie in the process. The last decade of discoveries has both clarified their evolution—by reinforcing the link between birds and flesh-eating dinosaurs—and confounded it—by conjuring multiple candidates for missing-links. If you were to seek to eradicate the birds by traveling back to the Jurassic Period, you would need to wipe out much more than only Archaeopteryx. As you saunter across the ancient supercontinents, seeking to eliminate the ancestor of the bird that stole your stir-fry, beware that you might run into one of that bird’s ancient cousins—and you’ve seen Jurassic Park. 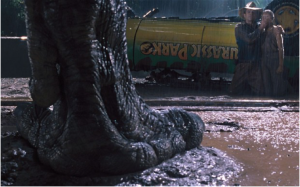 …although you would not have run into a T. Rex. Tyrannosaurs, like nearly every dinosaur depicted in Jurassic Park, lived during the Cretaceous Period.  (Source)

Some sources where you can read more about this: