I’ve been watching a lot of Planet Earth lately (thank goodness for Netflix), and I started to realize that I do a lot of blogs about animals. Not to worry, I know what will shake things up: plants! The Ruins, based on the book of the same name, is actually a scary movie about a plant-infested Mayan ruin, which I found to be a great bad horror movie that you might want to watch before reading these spoilers. 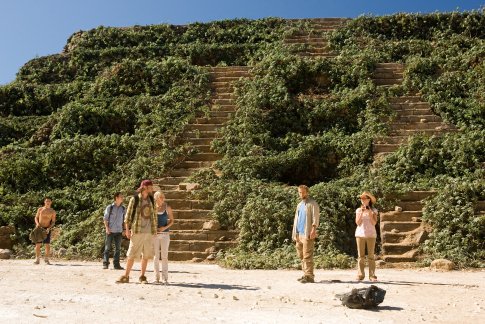 So the vines that cover the ruins are in fact carnivores and try to eat up anyone who so much as touches them, but plants don’t really eat animals, right? They’re autotrophs and photosynthesize their own foodstuffs. While that is true of most plants, there are hundreds of species of carnivorous plant in nine families! Because they live in low-nutrient environments, carnivorous plants evolved to trap and digest various invertebrates and occasionally even frogs and mammals! Scary, but plants growing in soil without fixed nitrogen need some way to obtain nitrogen.

Two common plant traps are pitfall traps and flypaper traps. Pitfall traps are specialized leaves that fold into deep pools filled with digestive enzymes. An ant investigating a nice-smelling source of nectar slips on the waxy interior and falls, never to get out. Some can get big enough to digest mice! Sundews, on the other hand, use sticky glandular hairs (“flypaper”) to ensnare insects that land on them and produce digestive juices, including proteases and phosphatases, to digest the prey.

My favorite meat-eating plant is the Venus flytrap. When an insect or other small tasty thing walks across the jaws of the flytrap and triggers two or more hairs in quick succession, the flytrap snaps shut and begins to secrete several digestive enzymes. Come on, that’s super freaky; plants are not suppose to move! The mechanism that allows the plant to react so quickly is a rapid change in the turgidity of the cells or change in cellular osmotic pressure. While early theories involved the influx of salts (sodium and/or potassium) that would cause this, Hodick and Siever (1989) showed evidence to the contrary.

An alternative explanation is that touching hairs results in a change in electrical potential, though this is difficult to study as any experiments inadvertently trigger the closing anyway! The best current hypothesis is that a proton pump moves H+ ions out of the midrib cells and into the intercellular matrix. This results in a net negative charge in the cell, which provides an electrical gradient for calcium ions to flow down, creating the osmotic gradient that leads to movement.

This simple mechanism, however, does not work indefinitely and has severely limited capabilities, so don’t worry too much about vines carrying your body off though this mechanism. The meat-eating vines from the movie certainly seemed supernatural between talking flowers and strong vines. Ian Malcolm (Jurassic Park) once said, “Life finds a way,” but I wouldn’t cancel any plans to visit Mexico any time soon.