Today, the rave and electronic culture has boomed, increasing the use of psychedelic drugs to enhance the feelings and sensations of one’s surrounding environment. Certain case findings have shown that these drugs could indeed enhance dreamlike states similar to the dreams we experience when we are asleep, which could be a breakthrough in alleviating certain neurological symptoms, such as depression. Does this mean that these drugs are no longer deemed unsafe?

Psychedelic drugs, such as magic mushrooms, MDMA and LSD, have become the new craze in the drug world, which can be easily accessible. In particular, the new drug that everyone is looking for is often called “Molly.” Advertised in music and party scenes, Molly has attracted a lot of attention in rave culture. Who exactly is Molly? And what exactly is it about Molly that has its users craving for more?

Molly, or MDMA, is the powdered crystal form of 3,4-methylenedioxymethamphetamine, a drug commonly pressed into ecstasy pills. However,

given ecstasy’s reputation as a drug that is commonly laced with other substances, Molly is considered a more pure form of MDMA. According to the Drug Enforcement Agency, MDMA acts not only as a psychedelic drug, but also as a stimulant that can be swallowed, dissolved in water or snorted. Once ingested, the drug floods the brain with various neurotransmitters, such as norepinephrine, serotonin and dopamine. This creates a euphoric and energetic feeling that enhances one’s perception of one’s surroundings. It has been shown that of the three types of neurotransmitters released, serotonin causes the evident change in social and personality affects. Dopamine, norepinephrine, and serotonin are all key neurotransmitters that play major roles in proper functioning in everyday life.

Dopamine and norepinephrine are excitatory neurotransmitters, meaning their function involves exciting or stimulating the brain. Dopamine is perhaps one of the most important excitatory neurotransmitters with regard to regulating everyday functions such as memory, performance, motivation and drive. Similar to dopamine, norepinephrine is responsible for stimulatory processes in the body that affect anxiety, mood and focus.

Because both neurotransmitters are fundamental to human functioning, the use of drugs or stimulants that activate these neurotransmitters can eventually cause their depletion, which can seriously harm overall bodily functions. For example, a reduced concentration of dopamine has been proven to have a direct correlation with Parkinson’s disease, best known for affecting legendary boxer Muhammad Ali. This disorder affects the nervous system, causing slow, involuntary (hypokinetic) movement and currently has no cure. A reduction of norepinephrine can also cause decreased focus, low energy and a permanent change in the normal sleep cycle.

As mentioned previously, the effects of Molly are mostly correlated with the large release of serotonin. Unlike dopamine and norepinephrine, serotonin is an inhibitory neurotransmitter that helps regulate homeostatic brain function. Serotonin plays a significant role in regulating mood, social behavior, sleep and appetite. Because Molly increases emotional stimulation, it causes significant social and mood changes.

So, why is Molly one of the most popular drugs used today? Besides the increased energy, reduced inhibitions and perceptual distortions perfect for enhancing one’s current surroundings, it is odorless, making it difficult to detect when used and therefore easier to provide and access. Many people are intrigued not only by the potential safety of its pure form, but also by its ability to enhance certain aspects of their surroundings, such as lights, art and music. By strongly elevating one’s perceptions and sensations, a person using Molly is more compelled to use the drug in order to experience another dimension of their surroundings that they cannot obtain in a sober state.

Some studies in 2010 have shown that Molly may even relieve post-traumatic stress disorder (PTSD). In one study conducted by Dr. Michael Mithoefer, a South Carolina psychiatrist, MDMA and a placebo were given to patients suffering from PTSD whose conditions had not been alleviated by any standard combination of antidepressants. The study showed that MDMA not only proved safe when administered in controlled settings, but also was effective in treating PTSD patients along with psychotherapy. The dramatic reduction in immediate anxieties allowed patients to express themselves on a psychological level as the body and brain were energized by MDMA. Ten of the 12 subjects no longer experienced PTSD symptoms after two months of treatment and were no longer eligible to be considered PTSD patients!

Despite such astounding results with MDMA, there are underlying concerns that need to be made clear. First, the authors of the study made clear that the use of MDMA in this case was to treat a serious mental illness that approximately eight percent of Americans suffer from as a result of war. Frankly, scientists still have little knowledge about how to treat it and warn that potential cures are administered with caution. Additionally, with only 20 participants in the study, the results cannot be completely credible. Because many trials involving psychedelic drugs are still in premature stages, any positive results from such studies should be considered to a small degree until more sufficient research has been conducted.

So, how exactly does Molly change us on a biological level?  Once Molly has been taken, its effects usually last three to six hours, releasing large 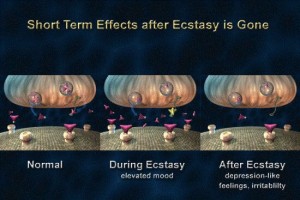 amounts of serotonin, dopamine and norepinephrine, which triggers the release of oxytocin and vasopressin, which play important roles in infatuation, sexual arousal and other emotional experiences that may cause a person to feel closeness and empathy. Because it is also a stimulant, it causes physical effects similar to those of cocaine and amphetamines, such as increased heart rate and blood pressure, nausea, chills and blurred vision. Another symptom similar to that of other stimulants is increased risk of addiction, a habit commonly formed by cocaine and heroin users. Because serotonin is depleted, pleasure is reduced, causing users to take more MDMA in response.

This downregulation of serotonin has been significantly correlated with long-term depression, sleep problems, anxiety and even suicide as 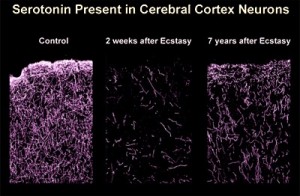 temperature (hyperthermia) and dehydration, which can result in liver, kidney and heart failure and even death. According to statistics, many deaths at rave and electronic dance music (EDM) festivals are due to the unawareness of high body temperatures of users dancing for extended periods of time. Molly can also interfere with a user’s metabolism, which can cause harmful levels of the drug to build up due to its inability to be broken down if taken rapidly. 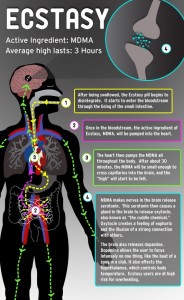 Another thing to consider is that about half of the Molly sold is not pure MDMA but instead contains a mixture of other psychedelic drugs or methamphetamines that could cause even more severe damage to the user.

Ultimately, research on psychedelic drugs has not been substantial enough to prove either harm or benefit to the human body. However, because Molly is also classified as a stimulant, the health effects on users can be easily concluded by using tangible biological data, such as neuroimaging, to portray its effects on the body. As for pure psychedelic drugs, psychological data cannot be proved as credible without more concrete and testable data; therefore, more research is still needed to determine the overall health effects on users. There is potential for MDMA in controlled settings in therapeutic psychiatry, but it is too early to tell if such positive effects will outweigh the associated damage. At the end of the day, no drug is absolutely safe, and until more research has been done, we would be too bold to think otherwise. You only have one body, so treat it with the most respect that you can. Stay cautious, my friends.

2) Something (potentially dangerous) about Molly (CNN)

4) What are Neurotransmitters? (The Brain Wellness Program)

5) Effects of Molly: The Risks You Need to Know About

6) How to Safely Take MDMA