Senior Spotlight: Combating the Epidemic of Alzheimer’s Disease in America

It’s no secret that America is getting older. As studies project, over 25% of the American population will consist of citizens over the age of 60 by 2050.1 (Figure 1). This means the spotlight will be veered towards the older population; whether it be the social or the economic implications, a shift in the age structure will significantly change the face of America. 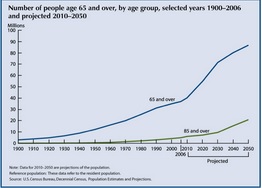 Already, the government is responding to this rapid change by creating policies that speak to the older generation. Amongst the various policies, there is one in particular that speaks the loudest: The National Alzheimer’s Project Act (NAPA), which addresses the big issues of Alzheimer’s disease at a national level.

Alzheimer’s disease is a serious progressive neurodegenerative disease that is caused by the death of nerve cells, also known as neurons. There are two major factors that typically lead to this disintegration:

o The tangles are fibers caused by abnormal tau proteins. Normally, tau proteins make up and stabilize parts of microtubules; hence, when they become abnormal, microtubule structures collapses, blocking the transportation of nutrients and other necessities to and from other neurons.2 This isolation eventually leads to cell death.

Together, these factors leading to the death of nerve cells often times result in serious memory loss, confusion and other cognitive impairments. This isolates patients from communicating with others and deprives them of their independence. 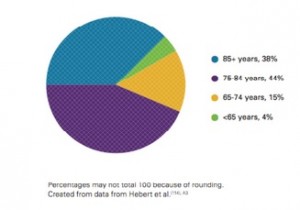 As a consequence of the lack of pharmacological or preventative measures, Alzheimer’s disease provokes the dire issues of national health and economic burden. Not only does the disease affect the millions of Americans that are diagnosed, but it also influences the health of caregivers as well, many of which are family members. About one-third of caregivers report symptoms of depression and more than 60% of them rate their emotional stress as “very high” and “high”.5

One of the many attributes of the patients’ compromised health is high cost; long-term care costs of patients with Alzheimer’s disease are especially significant as private health insurance and disability policies cover very limited costs of care services. Moreover, most government services are restricted to short-term care.

The costs of this disease burden not only the caregivers, but also the nation. The current cost of Alzheimer’s disease on a national scale is approximately $202 billion dollars, which includes Medicare, Medicaid, out-of-pocket costs and other payers.6 The cost is projected to increase five-fold, amounting to $1.08 trillion per year by 2050, making Alzheimer’s the most expensive disease in America.6 (Figure 3). 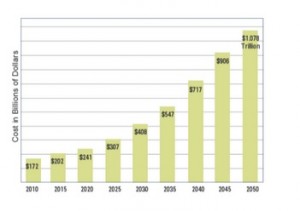 As the aging of America continues to accentuate the growing health and economic issues of Alzheimer’s disease, NAPA was signed into law and released to the public in the recent years to combat this crisis.

This law signifies a big step towards fighting Alzheimer’s disease. As the government is now recognizing this disease as a national issue, a greater effort to overcome and mitigate the issues of Alzheimer’s is being taken. Many improvements are already being observed under the guidance of NAPA.

A new partnership called Accelerating Medicines Partnership (AMP), which consists of NIH (National Institutes of Health), biopharmaceutical companies and non-profit organizations, was established to identify biological targets of Alzheimer’s disease for new diagnostic and drug development.8 Some exciting discoveries have been made, including the discovery of risk-conferring genes for late-onset Alzheimer’s disease, such as the rare variation of a gene called TREM2, and the identification of 11 new genes that offer important insights to the pathway of the disease.8 In addition, interventions to mitigate psychiatric conditions for not only Alzheimer’s patients, but caregivers as well, have been discovered.

In hopes to improve public awareness, the Health Resources and Services Administration (HRSA) released an education course aimed at educating primary care physicians, nurses and nurse practitioners on strategies to diagnose, monitor and treat patients with Alzheimer’s disease.8 An additional 23,000 people were trained in Geriatric Education Centers through many modalities, ranging from in-person conferences and workshops to on-demand websites.8 A series of free webinars and presentations connecting research and services were released to the public in 2013 to allow easy accessibility to the public as well.8

If one law in these recent years can make this big of a difference, imagine what the next 40 years will bring. As they say, with age comes wisdom; with America’s population getting older, more light is now being shed on the needs of a changing demography. As more focus is shifted to Alzheimer’s disease on a national and federal level, the public can anticipate a wave of novel discoveries and improved treatments, which will transform the lives of millions of patients and caregivers on a national and global scale.