Landing in Iceland was wonderful, if only to escape the plane and stretch my legs properly. At first, I was glad for the hefty snow jacket I had come off the plane wearing, but after about two minutes outside of the airport, it became apparent that the building was kept extremely well air conditioned. Getting to my hotel was the first stop, but it was about 9 a.m. and I was definitely antsy to get going and start searching for my puffins.

I don’t care too much about the amenities in hotels, except for a good swimming pool, of course. The hotel in Keflavik was nothing too fancy, but something did catch my eye as I walked along the hallway to my room: beautiful photographs of the Icelandic landscape lined the walls. Lush green valleys, the vibrant hues of the Aurora Borealis and ice-blue reflecting rivers were just a few of the ones I saw on the way to my door. I promised myself to take a much longer look once I returned that evening, but my first priority was to get out to take some photos of my own.

The bus could only take me so far; it dropped me off in a town that had dirt roads. Maybe “town” was not the right word as it was more like a rest stop. From there, I had planned on making it to the edge of the island by foot, but a particularly persuasive woman rented out a bicycle to me. A warm sun and the exertion of riding the bike left my arms and the back of my neck damp with sweat. That was not good news, because I knew it would be colder by the ocean, and all my shivering would force me to rely on the tripod more heavily. If the puffins were close enough, I had hoped to do a freehand shoot. The salty breeze hitting my face made me stop and close my eyes for a second to let the brine-filled air wash over me.

I rested the bike against a cluster of moss-covered boulders and began to fit the telephoto lens into my camera. After taking a few adjusting shots to get the correct white balance and shutter speed, I took a look at my surroundings so I would be able to find my way back to the bicycle.

Coming to Iceland in the middle of June was not some impromptu decision. Atlantic puffins only return to land during the months of April through August, and over half of the world’s puffins return to Iceland specifically. My trip was smack in the middle of breeding season, so I was able to get a good look at the puffins nesting around cliffs along the coast where they could make their burrows in crevices between the rocks or in the soil.

It took a good thirty minute walk along the cliffs before I finally found something to take pictures of. Among all the cawing seabirds, I heard the distinct sound that a Google search on the plane had prepared me to keep my ears open for. It was a deep rumbling call almost akin to a chainsaw buzzing. Using the zoom in my camera, I scoped out the dark rocks along some lower ledges, and my heart swelled when I saw the puffins. There were about sixty or seventy, which wasn’t a surprise since — like other auks (diving birds in the Alcidae family) — puffins breed in colonies.I used my camera to get a closer look at one of the individuals flying in from the sea and tried to follow it back to its burrow. After landing, it ducked into the opening of the burrow and disappeared. 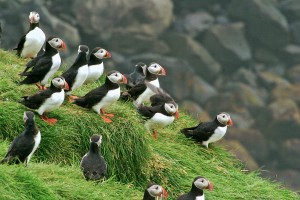 I set up my tripod, took my stance behind the camera and began invading the puffins’ lives through my lens. The burrows looked like they reached pretty deep into the earth; I would have guessed that they were about two feet deep at least. It was difficult to get a clear view of any hatchlings, but their dark feathers would have made it hard to see them against the cliffside anyway. I also had a hard time telling the difference between the males and females since both had similar coloration, but that can be common in a species where pairs mate for life.

I found a level spot closer to the edge of the cliff, and from there I could get a little glimpse into some of the burrows. Most of them held only one egg. Again, I wasn’t surprised since 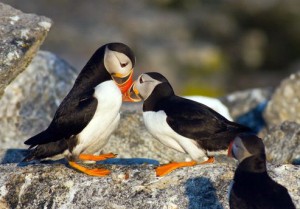 bird species who mate for life often lay only a single egg each year. All over the cliff, puffins were flying back from hunting at sea, and their partners were taking off for their turn to find food. I definitely got a couple of good shots where it looked like the parents were greeting each other with their beaks and switching out nest guard shifts.

It was adorable, to say the least.

It was late in the evening when I finally decided to call it a day. Three full memory cards would definitely keep me occupied for the rest of the night. I took a couple of quick shots of the scenery so that I could remember the site and headed back to my waiting bicycle. Out of habit, I began browsing through the photos I had gotten so far, and with each step, the rumbling call of the puffins faded into the sounds of the crashing waves.