In the Jurassic Dark

Aside from bad puns, my favorite thing in this world might just be dinosaurs. For years, I rejected the idea that the dinosaurs from my favorite 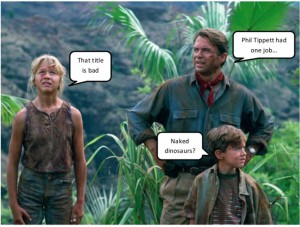 dinosaur movie were anything other than realistic. Three things, however, stand out as ludicrous depictions of prehistoric animals.

First off, Theropods as small and as sneaky as the Compsognathus “Compys” or as big as the mighty “Tyrant Lizard King” Tyrannosaurus rex probably had feathers. This is well documented since structures indicating feathers have actually been found on the fast-as-hell velociraptors.

Speaking of velociraptors, they were man-sized, medium weight, and able to tackle a T. rex and open doors, right? Actually, Velociraptor mongoliensis was not the basis for the “clever girls” from the movie; Deinonychus antirrhopus is the dinosaur Michael Crichton renamed Velociraptor for the more aerodynamic sounding name. Deinonychus and Velociraptor are somewhat closely related, and while the book was being written, a new raptor was discovered in Utah (they called it Utahraptor out of creativity).

Imagine that you were to travel back in time to a Cretaceous jungle clearing and a Velociraptor is stalking you. With a fierce hiss, it comes out of the brushes, claws outstretched, and starts sprinting toward you. The best course of action from that point is probably to drop kick that goose-sized genius and its buddies back into the bushes. By genius, of course, I mean a smarter-than-average goose you might meet but a tasty chicken nonetheless. Deinonychus, however, are the raptors (albeit with feathers) from the movie that would probably be pleased to meet you, and be pleased to eat you. Utahraptors are scary, they are bigger than you and faster than you. That said, no door opening for any of these species most likely, so we have that going for us at least.

One last magic s-word (science) that saves Crichton and Spielberg from complete, laughable incorrectness is that they claimed to have used the genetic code of modern-day frogs to fill any gaps in the sequences of DNA in the dinosaurs. This means throughout the movie, we are not seeing the mighty T. rex or the “clever girl” raptors; we are watching two blonde children get terrorized by a weird Froggosaurus rex and oversized jumping frog velociraptors.

That magic s-word doesn’t actually save that much: it is common knowledge that the clade Dinosauria and the order Anura (frogs and other amphibians) had a common ancestor almost 400 million years ago. Humans and dinosaurs, however, had a common ancestor only 300 million years ago, so it would have made more sense to splice our DNA into the dinosaurs over that of a frog! Most preferable, it seems, would be the clade Avialae (birds) since Dinosauria is actually a parent clade!

In the book, Michael Crichton was trying to discuss the ethics and dangers of bio-engineering as well as preach the downfall of mankind’s arrogance, but, after getting so many basic facts wrong about dinosaurs, his arrogance is my only concern.