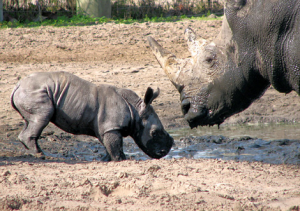 Tall green grass brushed against my face as I sat still, watching a group of female southern white rhinoceros wallow around in a mud hole. A healthy layer of mud was perfect to keep these rhinos cool under a hot sun. This layer on their hides also acted as protection from ectoparasites. One rhino in particular, a smaller individual, had caught my eye. She was lying on her back and wiggling to spread mud onto her tough slate-gray skin. Every time she rolled onto her left side, her legs would kick playfully before she went back onto her back. If, however, she was on her right side, she would immediately roll over and sit up. Her ears would flicker and twitch to shake out any mud that might have gotten in, and she would look around at the grassy plains of her natural range in northeastern South Africa.

My translator, Dova, had told me the female was probably a two-year-old calf. She was definitely smaller than other females; if I had to estimate, she was maybe eight feet long from her head to her tail. I could not stop staring at her and the rest of the group. It had taken four hours that morning to track down the crash (the term for a group of rhinos, which made me giggle uncontrollably when I first found out a few days ago). It turns out that southern white rhinos, like elephants, live and travel in groups of up to 20 females. I wanted to cover this southern white rhino subspecies as my next project to highlight the plight of their close relative, the northern white rhino. Because there are fewer than 10 northern white rhinos left in this subspecies, I was unable to photograph them directly. However, if habitat loss and poaching — the two main causes of the northern white rhino population’s decline — continue to increase, the same fate of extinction could befall these southern white rhinos wallowing in front of me. It is a scary thought, but at least the fear of losing any more rhinos has inspired greater research and conservation for them. 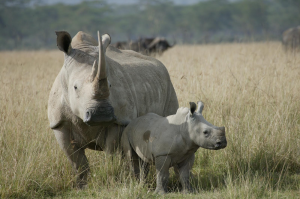 There were two rhinos in the group we found that were obviously babies. Dova said those two probably ranged from weeks to a few months old. Occasionally, they would romp around through the grass and mud, splattering it onto their skin. The two of them would start roaming around the mud hole, but after watching them through the camera for about an hour, I noticed that an invisible perimeter existed. Any time one of them ventured too far from the adults, the babies would run back to their mothers.

Rhinos only give birth to one baby at a time, so mothers are able to keep all their attention on their little ones. Fortunately, southern white rhinos don’t have any natural predators because of their tough skin and size — they are the second-largest land mammal. But even so, mother rhinos aggressively protect their young. Whenever the babies ventured off for too long, their mothers abandoned their wallowing, and rather than looking around in the grass, they would perk up their ears and let out a huffed pant because they have poor eyesight. The babies would immediately prance back to their mothers to touch base. Yes — literally, the babies would nudge their mothers’ legs and sides with their noses as if physical contact restored their sense of security.

I had 10 of my 17 memory cards with me and was already almost through the fourth one. Yes, it was slightly excessive, but I know myself, and every time I am out to photograph on location, I tend to overshoot. Some may call it extreme, but I think I’m just being thorough. As I was switching lenses, I heard a short bellow from one of the larger females. I asked Dova what that sound meant, but before she could answer, the baby who had ventured too far from the group earlier went dashing toward the calling female. I quickly brought the lens into focus and snapped a series of shots to capture the baby’s tiny galloping movements. These southern white rhinoceroses definitely stole my heart, and I hope everything in our power is done to keep them off the endangered species list.