Cloning: from Tadpoles to Household Pets to Beating Organs

Currently, scientists are conducting unimaginable experiments that at times seem to defy the laws of nature. Although they may be perceived as the stereotypical wild-haired, underground lair, “mad” scientist, the work they are actually doing has been revolutionary in progressing modern research and medicine. One phenomenon that scientists have been working on is cloning.

Cloning is formally defined as the replication of an organism’s DNA to make a genetically identical copy of said organism. This type of experiment may have seemed impossible just a few decades ago. However, discoveries in the past few years have greatly advanced the development of cloning. In fact, cloning has evolved so much that over 10 different animal species have been cloned in the past 15 years. What was once a Star Trek fantasy has now become a reality! So, how does cloning work, and what are some of the animals that have been cloned? Here is a condensed list of the major contributors to the great cloning race:

In 1952, scientists Robert Briggs and Thomas King developed an innovative nuclear transfer technique that sparked the widespread interest and initiation of cloning research. Their nuclear transfer method involved removing the nucleus of an embryonic tadpole cell and transferring it to the egg cell of a frog that had its nucleus removed. They then fused the two frog cell components together to create a zygote that underwent normal fertilization and cellular development. The result was a tadpole with the exact genetic sequence as the tadpole from which the embryonic nucleus was taken. Unfortunately, Briggs and King’s nuclear transfer technique was limited in the sense that it could only be utilized with embryonic cells. It wasn’t until 1958 that researchers could use adult somatic cells to clone organisms as well. Josh Gurdon, a scientist who was also heavily involved in cloning experiments, was able to prove that cloning organisms could work with adult cells that had already differentiated. His experiment involved taking the nucleus of a tadpole’s intestinal cell and implanting it into a surrogate frog’s egg, which allowed him to produce cloned tadpoles. This development has allowed researchers to perform experiments broadly without having to restrict themselves to using solely embryonic stem cells. Gurdon’s advanced method of using differentiated nuclear transfer laid the groundwork for future animal cloning. 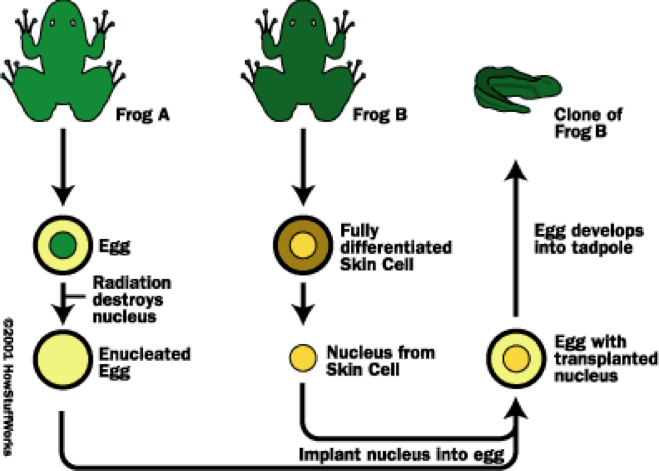 Image illustrates the nuclear transfer technique, developed by Robert Briggs and Thomas King, in which the nucleus of one cell is replaced by the nucleus of another cell.

Possibly the most famous cloned animal is Dolly the Sheep. Dolly was created by scientist Ian Wilmut, using the differentiated nuclear transfer technique developed by Josh Gurdon. Wilmut took the nucleus out of a white-faced sheep’s udder cell and transferred it into the egg cell of a black-faced sheep. Electric currents were used to fuse the transferred nucleus and egg together, and the zygote underwent multiple cell divisions. A black-faced sheep was used as a surrogate mother to carry the developing blastocyst, and she eventually gave birth to a white-faced sheep, proving that the cloning was successful. Dolly was the first-ever cloned mammal, and she was even featured on the cover of Time magazine. She was specifically created for a project involving the production of mammals with desirable proteins in their milk to aid in human medicinal research. For instance, human genes could be transferred into sheep and cows so that the animals’ milk would contain blood clotting factors or other useful proteins to treat various human diseases. After the successful cloning of Dolly, scientists rushed to clone other mammals with the hopes that they could garner the same amount of attention that Dolly did.

The first cloned cat was developed by researchers at Texas A&M University, again using the nuclear transfer technique. Contrary to expectations, as CopyCat grew older, she did not have the same coat coloration as the cat from which she was cloned. The researchers concluded that the difference in coloring was due to epigenetics, meaning that the fur patterns were influenced by modifications to specific genes. Genes that encode for different colors of fur can be randomly turned “on” or “off,” and this results in variation in coat color among certain organisms. For example, portions of a DNA sequence may have methyl groups attached to them. This can inactivate genes in that region, resulting in a different phenotype from an organism that has the same DNA sequence, but without methylation. 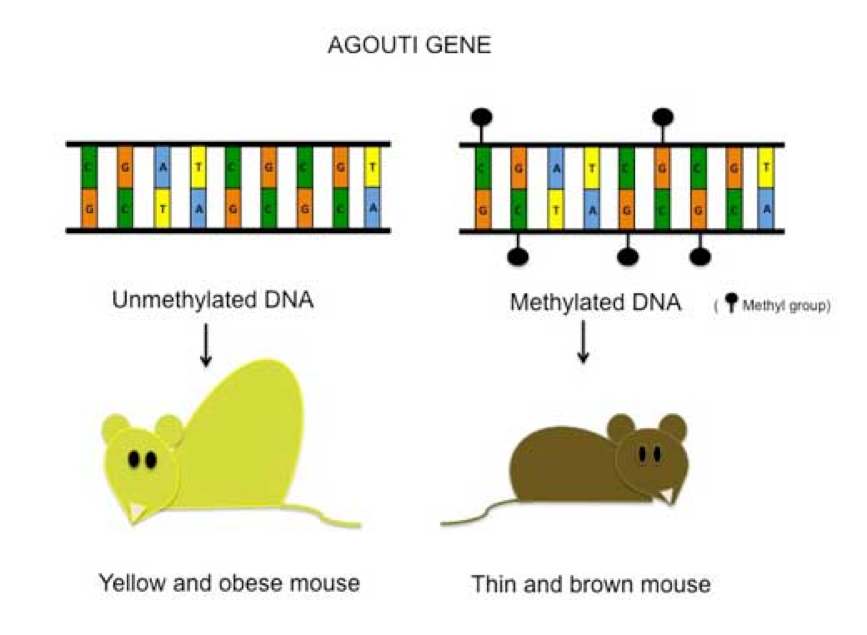 In this specific case, the epigenetic modifications to the cloned cat’s genes resulted in a cat that did not look like its original donor. Thus, while CopyCat and the cat it was cloned from are genetically identical (i.e. have the same DNA sequence), they are not phenotypically identical. This discovery revealed that clones might not always look exactly the same, which was a common misconception. CopyCat raised ideas of creating new industries that involved cloning household pets, and with her success, scientists raced to clone man’s best friend — the dog.

Snuppy, the first successful dog clone, was created by scientists in South Korea using an ear cell from an adult Afghan hound for nuclear transfer. Over 100 surrogate dogs were used to carry the fused embryos. However, only three of the surrogate mothers became pregnant, and only one mother delivered a healthy puppy. To prove that Snuppy was a true clone, researchers used surrogate dogs that were all different breeds from the Afghan hound. The dog that delivered Snuppy was a golden Labrador retriever, and since Labradors do not naturally give birth to black Afghan hounds, scientists were able to immediately verify that their cloning techniques were effective. While some critics argue that the goal in creating Snuppy was simply to spark new lucrative pet industries, the scientists who cloned Snuppy actually developed their experiment with the intention of advancing medical research. They wanted to use dog models to study human diseases because using identical test subjects allowed for better consistency within their studies. Snuppy is currently living a healthy dog life and has even become a father.

Stem cells have been the focal point for numerous therapeutic treatments. However, there has been controversy over using embryonic stem cells for research. So in 2006, Dr. Yamanaka developed a technique to revert adult human cells back to their embryonic state. These cells became known as induced pluripotent cells. With Dr. Yamanaka’s method, scientists could use the differentiation potential of embryonic cells without having to destroy actual embryos. Prospective uses for these cells include regenerative medicine, such as growing human tissues or specific organs to replace diseased ones in patients. In 2013, scientists at the University of Pittsburgh did just that by using induced pluripotent cells to grow a beating heart inside a petri dish. They extracted a mouse heart and removed the mouse’s own cells to use the heart as a scaffold, which is a structure that maintains tissue shape. Then the empty scaffold was replaced with human induced pluripotent stem cells, and within weeks the cells began dividing to ultimately rebuild the stripped heart into a functioning, contracting organ. The organ has a heart rate around 40-50 beats per minute, but is currently not strong enough to pump bodily fluids, such as blood. The success of this experiment has pushed the boundaries for tissue regeneration, and offers new light on the types of accomplishments that can be made through this type of research. 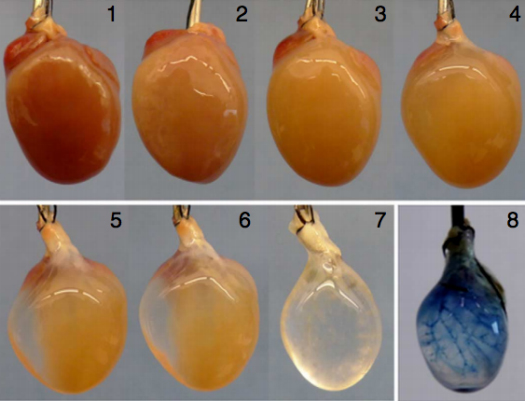 Example of a mouse scaffold. The first image (1) is the fully extracted heart. The last image (8) is the heart once all of the mouse’s own cells have been removed, thus providing structural support for new implanted cells.

There have been huge strides in cloning over the past couple of decades. From amphibians to fully-grown mammals to functioning organs, the advancements in cloning are proof of how rapidly science evolves. With research constantly finding revolutionary breakthroughs, the next pioneering discovery could be lying just around the corner. However, until that discovery is found, one can ponder on the next potential cloning subject: humans.