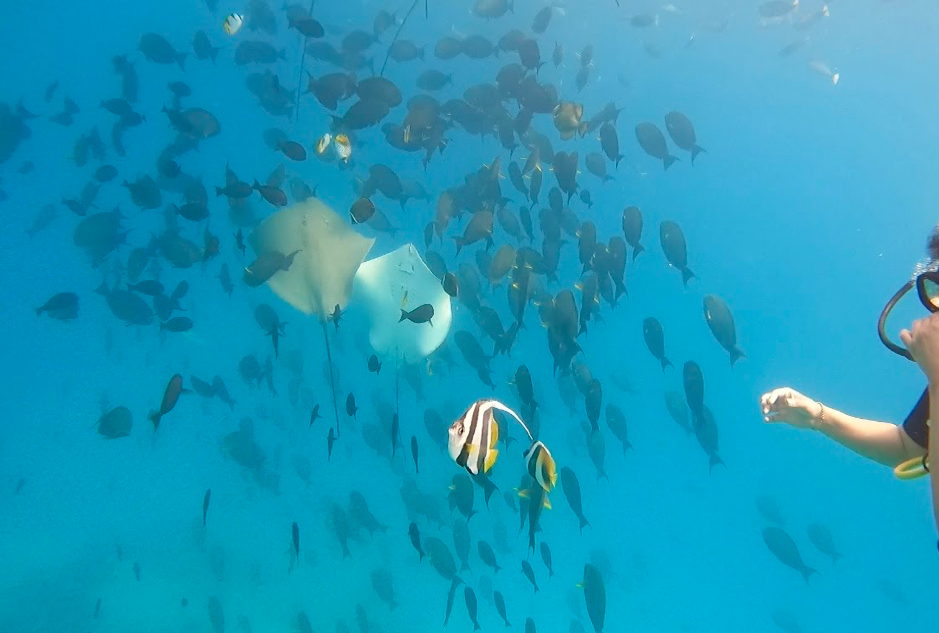 As I set out into the Indian Ocean, the waves crashed against the boat, increasing my seasickness. It didn’t help that the people on the shore looked more and more like tiny ants as we moved further away from the coast. My heart was pounding out of my chest as we inched closer to the diving site in the deep waters surrounding the islands of Maldives. The scintillating ocean shone a brilliant blue, and I could not wait to discover what sights the world down under the Indian Ocean had in store for me. You would think that having done scuba diving before, I would have been less nervous, but I was as, if not more, jittery than the first time I dove.

Originally, my family and I wanted to conclude our trip with an adventurous activity, so we planned to dive the evening before we left Maldives. However, science proved to be a barrier to our plan. We learned about decompression sickness (DCS), commonly known as “bends,” and how that can cause problems in our bodies. I didn’t think this would be a serious problem, but little did I know what decompression sickness consisted of. Exposure to a reduced barometric pressure, the force exerted by the atmosphere per unit area, increases a diver’s risk of DCS. As divers descend deeper in the ocean, there is an increased intake of inert gas (mainly nitrogen) in their tissues which could have deadly consequences once the altitude increases. A sudden reduction in pressure through activities such as flying in an airplane could cause inert gas to come out of solution and form bubbles in the tissues and bloodstream. It was important to remain at sea level long enough to allow the excess inert gas to escape from the tissues to prevent DCS. Thus, we realized that diving right before flying back home was not an option for us anymore.

Before our dive in the main ocean, we had an elaborate training session with our diving instructor in the shallow waters of the lagoon surrounding our resort. He made us practice some important breathing techniques with our scuba gear and spoke about descending and ascending slowly to prevent DCS. Before my dive, curiosity got the better of me, and I decided to ask my instructor more about decompression sickness. He thought it was because I was nervous (which I neither confirmed nor denied), but I did find some answers. As divers descend, they breathe in compressed air in the oxygen tank that contains nitrogen. This nitrogen is to account for the fact that the air we breathe in everyday consists of 21% oxygen, 78% nitrogen and <1% of other gases.

It is inevitable that nitrogen goes into the body’s tissues, but this is not a problem as long as divers do not change their altitude too quickly underwater.  When a diver changes their altitude (i.e. coming up or going deeper), the hydrostatic pressure (pressure exerted underwater) also changes. If divers rise to the surface at a slow rate, this allows more time for the nitrogen to safely leave the body through the lungs, reducing their risk of DCS. However, coming up too quickly causes bubbles to form in our tissues and bloodstream. What do these bubbles really lead to? It turns out the symptoms of DCS could vary from mild joint pain and rashes to a severe neurological injury if the bubbles reach the brain. In some extreme cases, it can even lead to paralysis or death due to tissue and nerve damage as the oxygen supply is cut off. This occurs if the bubbles block the arteries, restricting the blood oxygen supply to different organs.

After completing the training and realizing the severity of decompression sickness, I was ready   to jump into the Indian Ocean… or so I thought. Looking out towards the horizon, I put on my fins and tried to calm my racing heart. The vast expanse of the ocean shimmered as the sun struck the water. That imagery was enough to inspire me to jump. I was about to enter a different world, but I did not expect it to be even more special than my first dive. As I descended into the ocean, a throbbing pain engulfed my ears. My instructor used one of the many signs we had learned to signal that it was time to equalize the pressure. I did not know how complicated diving really was, as the pressure injuries that may develop with scuba diving was new information that I had received during training. As a diver descends, water pressure increases and the volume of air in your body decreases. This can lead to a throbbing pain in the diver’s ears and sinuses. Our diving instructor had explained it was important for divers to equalize the pressure by pinching their nose and trying to release air from their ears to prevent barotrauma. Barotrauma occurs when a gas filled body space is unable to equalize its internal pressure to accommodate changes in ambient pressure, damaging tissues in our body. Boyle’s Law governs how gases behave at different depths. There is an inverse relationship between the volume of a gas and the pressure exerted by it. As the ambient pressure increases during descent, the volume of the gas-filled spaces decreases unless internal pressure is equalized. If the pressure is not equalized, the space will be filled by tissue consisting of fluid and blood, which affects the middle ear, the external auditory canal, sinuses and teeth. This may cause sinus pain and can even lead to a ruptured eardrum, which is why it is important for divers to equalize internal pressure by pinching their noses.

While ascending, the opposite happens: the pressure decreases and the air in our lungs expands. The rate of air expansion in the lungs is much more than the rate at which it leaves the diver’s lungs and thus some of the air remains trapped in the lungs. The air is trapped in tiny air sacs, called alveoli, where gas exchange occurs in the lungs. The alveoli are made of thin and fragile tissue, and if a diver ascends too quickly, these sacs expand from the change in pressure and burst. This is called pulmonary barotrauma, and it manifests in different ways depending on where the trapped air travels.

Pulmonary barotrauma can lead to an arterial gas embolism (AGE), emphysema, and pneumothorax. Arterial gas embolism occurs when the thin alveoli walls rupture and the air escapes into small blood vessels in the lung tissue. This bubble can go to the arteries of the brain and the heart. As the diver continues to ascend, the bubble expands in the artery and blocks the oxygen supply to the organs. An air bubble in the heart can cause cardiac arrest, while an air bubble in the brain’s arteries can cause a stroke. Burst air sacs can force air into the tissues that surround the lungs, which leads to emphysema. Mediastinal emphysema is when there is pain in the chest located under the sternum and shortness of breath as the expanding air is forced into tissues surrounding the trachea and heart. Subcutaneous emphysema is when air is forced into the space under the skin around the collarbone and the neck. Pneumothorax is the most extreme of the three conditions to manifest from pulmonary barotrauma. Air from the ruptured lung expands into the pleural cavity (the area between the lungs and chest cavity). This exerts pressure which may collapse the ruptured lung to a fraction of its original size. In some extreme cases, the pressure can be exerted on the heart, trachea or other lung (tension pneumothorax). This intense pressure is enough to stop the heart, collapse the other lung, and distort the trachea.

The risk of pulmonary barotrauma can be daunting, but as long as you follow the instructions correctly from your diving instructor, the experience itself is worth it. It is a mesmerizing world down there, a place where I forgot about everything else and was just at peace with myself. I could feel every breath and every movement as I became one with the current. I felt like I was a part of aquatic life, swimming with the fish and other marine creatures. One of the highlights of my dive was touching stingrays (of course, not near the part that stings you) and seeing a school of colorful fish swim around right by my body.

I am always prone to nosebleeds after diving, and this time was no different. I even coughed up some blood, which was quite scary at first. Turns out, I was not able to equalize the air pressure properly. This caused the blood vessels in the lining of my nose to burst. I realized this is why scuba diving liability forms have multiple questions screening for individuals with a history of sinus trouble, allergies, a broken nose, or a deviated septum, as well as those who currently have a cold. Such individuals may find equalization difficult and may experience problems with nosebleeds, and it is best for them to not dive with a cold, congestion or any other condition that might block the sinus passages. Although the air trapped within the sinuses is not always painful, blood can run down the throat or in the sinus below the eye. This can emerge immediately or days later as a thick, black bloody discharge and can act as a medium for bacteria to grow and cause sinus infections.

For me, diving is an escape from the real world and from stress. As a recreational activity, diving offers multiple health benefits, such as a decrease in perceived stress and an improvement of psychological factors associated with mindfulness. Well-controlled studies are needed to clarify the mental health benefits of diving but it is also important to keep in mind that scuba diving is a potentially dangerous activity if safety regulations are not adhered to. A new diver is not familiar with the aquatic environment, and the use of specific equipment can be a source of stress for some individuals. But there are potential health and stress benefits for experienced divers that require more research. Health benefits or not, I hope reading about one of my favorite hobbies makes you feel inspired to try out something new. After all, you can be extremely adventurous while doing all that you can to prevent the risks involved to see a whole new world.