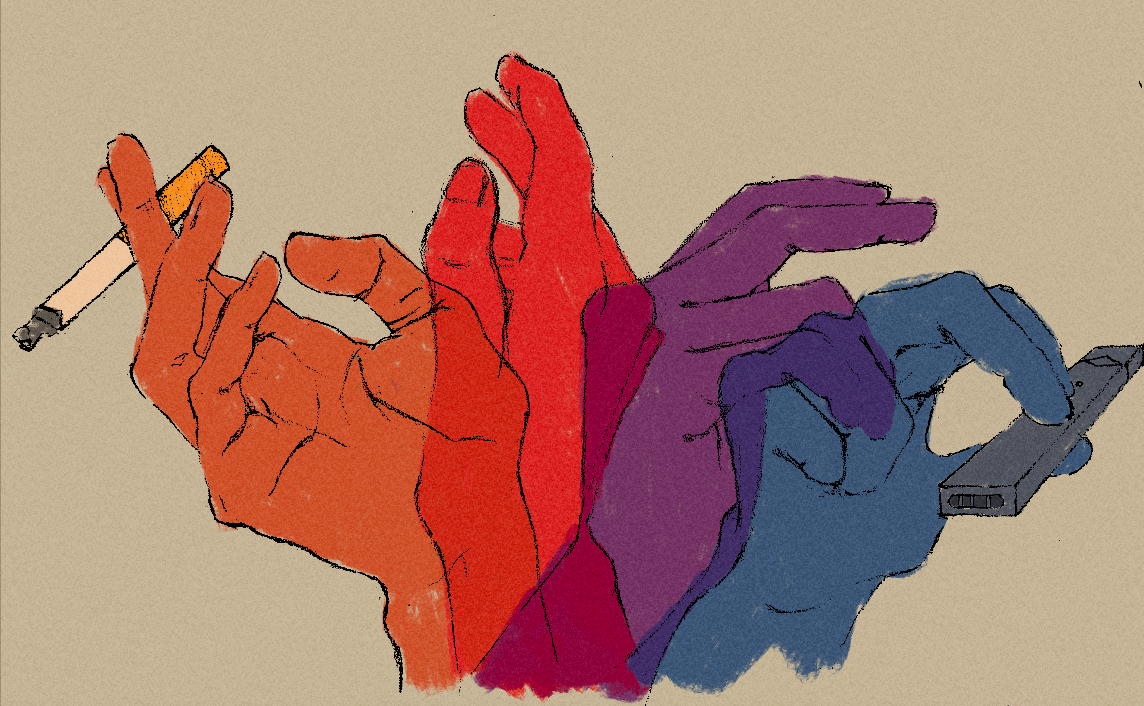 Smoke in the Wind: Ending the Normalization of Cigarettes

“They got lips? We want them.” This infamous quote came from an executive in Big Tobacco in response to a question about how young their target audience was. Smoking, once a exceedingly common pastime in our nation, has plummeted in popularity over the past few decades. Public efforts to fight back against the extremely powerful marketing, legal, and financial teams of multiple massive tobacco companies have proven remarkably successful. These efforts have prevented many from taking up smoking and have helped many others fight their addiction and quit smoking. The persistent public health campaign against smoking has been critical in pushing back against tobacco companies, and the benefits for our entire population cannot be understated. 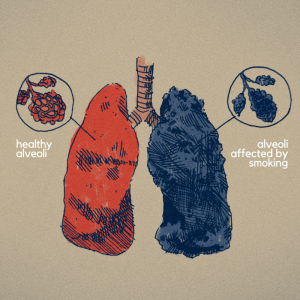 Smoking cigarettes is an appallingly dangerous activity. The simple act of inhaling from a cigarette introduces grime, tar, and tobacco into the mouth and the delicate airways of the lungs. This initially burns the upper epithelial cells and, with prolonged use, mutates and damages the deeper stem-like cells that are used to generate the entire inner layer of skin. The accumulated mutations in the cells of the respiratory system commonly lead to cancers of the throat and lungs that are associated with smoking. But smoking often affects even more than that, decreasing functional capabilities and increasing the likelihood of cancer in almost every organ. These effects are compounded by the addictive nature of nicotine, the active ingredient in tobacco, that makes it exceedingly difficult to stop smoking once one has started. Statistics show that only six percent of smokers are able to successfully quit, despite the majority of smokers wanting to, and that quitting often requires multiple attempts. But most of our readers are probably aware of much of this information, and many of you may have chosen to not smoke cigarettes because you knew of these health effects from a young age, which in itself is indicative of the importance and success of anti-smoking legislation.

This legislative pushback against smoking emerged in response to a public health crisis brought about by the popularity of cigarettes. Cigarette smoking expanded rapidly in the U.S. in the early 20th century following a massive influx of smoking advertisements from tobacco companies into modern media, including magazines, TV, and movies. The limited regulations on smoking ads meant almost every demographic was targeted, regardless of race, class, gender, and even age. 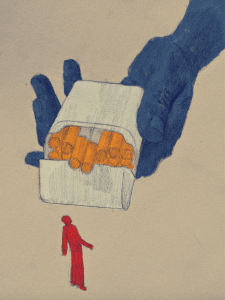 While tobacco companies were not technically “allowed” to market to children, teenagers were their most important target. Teenagers’ vulnerability to peer pressure meant they were the most likely ones to pick up smoking, and the addictive effects of nicotine could easily make them lifelong consumers. Advertisements promised beneficial health effects, like better digestion, a cure for asthma, clearer airways, and more, and cited supposed “approval” from doctorsusing manipulated survey findings. Tobacco companies also used celebrities and other popular icons to normalize smoking in our culture.

In spite of their optimistic advertising, tobacco companies were aware of exactly how addictive and harmful cigarettes were. Cigarettes were manufactured to contain the minimum amount of nicotine to cause addiction, and attempts at making “healthier” cigarettes–low tar, filtered, lighter weight, etc.–were heavily advertised. But scientists in both industry and academia were making clearer and more robust connections between smoking and its deleterious effects. The most jarring was lung cancer: many doctors at the time mentioned that they had only ever learned about it as a medical anomaly, a rare disease that some might have seen in their medical schooling, but it was now rapidly increasing in incidence. It took decades for smoking to be legally recognized for its true nature. The first Surgeon General’s warning came out in 1964, warning the public that smoking caused lung cancer in men, was a probable cause of the same in women, and was the most important cause of chronic bronchitis in the population. An onslaught of government legislation around tobacco sale and advertising followed suit in the years after.

Smoking was combated, interestingly enough, using many of the same methods that popularized it in the first place. Studies from the 1950s had shown increasingly stronger connections between smoking and cancer and similar symptoms. Publishing of the widely read article “Cancer by the Carton” in a 1952 Reader’s Digest shed light on this work and lead to the sharpest dip in cigarette sales since the Great Depression. This set the stage for a decades long back-and-forth struggle between the financial interests of tobacco companies and the health of the public. Tobacco companies, now threatened with ethical and health concerns, released an eloquently worded “Frank Statement to Cigarette Smokers,” which very effectively introduced doubt and questioned the quality of the causative relationships determined by well-performed, reproducible scientific studies. Physicians and the public alike became ambivalent about the dangers, and sales began to climb again. Then came a string of legislation, federal and state, attempting to curb the limits of tobacco companies’ power–power that was carefully protected with walls of lawyers, supposed “evidence” from industry scientists, and the aura of doubt constructed around the actual effects of smoking. Following the 1964 warning issued by U.S. Surgeon General Dr. Luther Terryl, there were multiple state-led mandates, including the 1965 requirement of warning labels on all cigarette packages, the 1971 ban on TV and radio commercials for cigarettes, the 1973 ban in Arizona on smoking in many public places to reduce the dangers of secondhand smoke, and incremental tax hikes on cigarettes to drive down youth purchasing rates. More recently, President Barack Obama signed the Family Smoking Prevention and Tobacco Control Act into law in 2009, ramping up the size of warning labels, requiring graphic imagery of damaged lungs as part of the label, and completely stopping advertising and sale of tobacco products to minors.

Additionally, various public health organizations have stepped up to help reverse the effects of decades of advertising and normalizing smoking. A major group is the Truth Initiative, a nonprofit organization working to completely eliminate tobacco use among youths and young adults. They are funded by the massive 1998 Master Settlement Agreement, which required major tobacco companies to make payments to 46 states, the District of Columbia, and five U.S. territories to compensate for taxpayer money that had been spent to treat smoking-related diseases. The initial payments alone, for the first five years and starting in 2000, were calculated to be $12.75 billion, and the prices are compounded annually by additional payments in perpetuity. The Truth Initiative has used its portion of this money for “education, tobacco-control research and policy studies, and community activism and engagement.” It has successfully driven teen cigarette use down from 23% in 2000 to 6% in 2018, and continues to push for the day when it can say that the number is down to zero percent. These massive efforts from the government and nonprofits, while not being able to solve all the capitalistic problems produced by tobacco corporations, have played major roles in our nationwide reduction in smoking levels.

Smoking rates have been on the decline, dropping from 20.9% in 2005 to 15.5% in 2016 among U.S. adults. These decreases in smoker populations have been directly linked to the protective measures taken by our government. The World Health Organization draws direct correlations between bans on tobacco advertising and an average of a 70% drop in tobacco use. Other researchers suggest that the five decades of anti-smoking efforts following Surgeon General Terry’s initial report may have prevented eight million deaths from smoking-related causes in that time. This meaningful government work has protected many from years of struggling with lung cancer, organ failure, addiction, shame, and pain.

Tobacco is a terrifying product, and it is frustrating to think of how effectively it was marketed to maintain a grip on society over multiple generations. Thankfully, in recent decades, we have witnessed a huge drop in tobacco use, particularly with regard to cigarette smoking. Many public health agencies and scientists working outside of tobacco companies have been a big part of that, and we currently have the lowest cigarette smoking rates amongst both our youth and adult populations in the past few decades. However, in recent years, a new smoking alternative has increased in popularity: electronic cigarettes, or “e-cigs.” Ferociously marketed to teenagers as “fun,” “cool,” and “safe,” these new nicotine-packed products seem to be quickly overtaking the niche that was only just emptied by cigarettes. Little is officially known about their health effects, and therefore even less has been done to regulate them. The parallels between the rise of cigarettes and e-cigarettes in our population are alarming, and the latter should most definitely be watched with a critical eye.