Being in such a competitive environment as a student at UC San Diego, it’s easy to doubt oneself. I always find myself debating over whether I have the right answers or am making the right decisions. But what better way to hype myself up than a good ol’ episode of Grey’s Anatomy that will motivate me to put my best foot forward stepping into this quarter– specifically Season 7 Episode 12: “Start Me Up.”

In this episode, we follow up with Henry, a patient who Dr. Teddy Altman married to ensure his surgery would be covered by her insurance. Dr. Webber is appalled by Teddy’s decision, accusing her of insurance fraud; however, Lexie is quick to confirm that the National Medical Anti-Fraud Association says otherwise. Upon my further research, the American Medical Association states that “a physician must terminate the patient-physician relationship before initiating a dating, romantic, or sexual relationship with a patient.” Teddy is no longer Henry’s surgeon and has passed on the case to Dr. Webber, yet their marriage may still be deemed unethical because Teddy could possibly interfere with the case with her knowledge as his previous physician. However, we can always count on Lexie to be a ray of sunshine as she supports Teddy’s courage to marry Henry, knowing that Teddy would never intend on inflicting harm.

PLEASE STOP READING THIS CAPTION IF YOU DON’T WANT SPOILERS: What started off as getting Henry health insurance turned into a loving, but complicated relationship because God knows Shonda can’t let anyone be completely happy on this show. Also, [REALLY BIG SPOILER] Henry ends up dying and that’s just really sad. But it’s a part of the Grey’s Anatomy experience, and I’m still here for it. Honestly, please contact me because I can go on and on about this situation omg. (Source)

The residents of Seattle Grace-Mercy West Hospital– formerly known as just Seattle Grace before the two hospitals merged– are paired up with first- year medical students who are eager to see the everyday life of a surgeon. After all, shadowing is one of the many ways that help people figure out what they want to do in the future. Especially for us hopeful undergrads looking to enter the medical field, shadowing medical professionals presents a great opportunity to see the realities of the field and to help us decide what career path we truly wish to pursue.

We follow the surgeons and medical students during rounds, visiting fifteen-year-old Sarah Cassidy. Sarah wants to try out for the volleyball team at school, but has spent her entire life avoiding sports and sticking to books due to having Treacher Collins Syndrome.

Treacher Collins syndrome is a condition that affects the development of bones and other tissues of the face. Signs and symptoms of this disorder can vary greatly in severity, however some common features include down-slanting eyes, notched lower eyelids, underdevelopment or absence of cheekbones and the side wall and floor of the eye socket, and a small, slanting lower jaw. 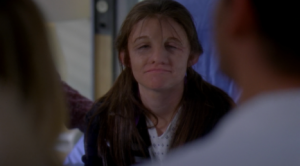 Treacher Collins syndrome is caused by mutations in the TCOF1, POLR1C, or POLR1D genes, which all play a significant role in the early development of bones and other tissues of the face. The genes produce proteins involved in the production of rRNA. A decrease in rRNA production due to the mutations can possibly lead to apoptosis– or self- destruction– of certain cells that are involved in facial structure development, according to researchers.

Dr. Mark Sloan suggests a highly experimental procedure to inject a donor bone with stem cells to build new cheekbones for Sarah. Dr. Arizona Robbins is hesitant, as she believes using Sarah’s skull bone would be a safer option; however, she eventually agrees after seeing the pros to using cadaver bone and Sarah’s desire to live life like a normal teenager. In real life, craniofacial reconstruction is also performed to treat the disorder.

Another patient being treated is Brady, who suffers from multiple injuries after being run over by a horse-drawn carriage the morning he and Kyle were going to sign domestic partnership papers. As a complication arises right before the doctors begin operating on Brady, one of Jackson’s medical students points out that Brady has hyperkalemia.

Hyperkalemia is an electrolyte disorder in which potassium levels in the blood are too high. This may cause life-threatening cardiac arrhythmias, muscle weakness, or paralysis. Hyperkalemia can be diagnosed through blood tests or electrocardiograms. 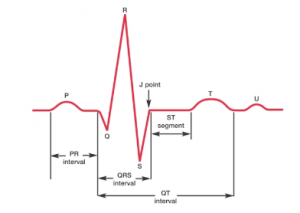 A normal ECG reading of electrical activity across the heart. (Source) 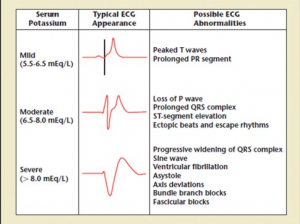 Hyperkalemia is indicated by a potassium level of over 5.0-5.5 mEq/L. The medical student tells Jackson that Brady saw peaked T waves and then a widened QRS and a sine wave rhythm on the ECG, indicating increased severity of hyperkalemia. (Source)

Owens immediately orders medication to lower Brady’s potassium levels in his blood. The medical student, Edward, shares that they learned about hyperkalemia in medical school just days before, and Owen commends Edward for his diagnosis. I find this moment rather inspiring as Edward takes the leap of faith to put his knowledge to the test, clearly showing how his hard work has paid off. As for Brady– he survives the surgery, but will have a slow and painful recovery.

This quarter, I encourage all of you to be daring like Sarah and Edward during times of uncertainty. It really doesn’t hurt to have some confidence in yourself. While I learn how to take my own advice, go out there and take some risks– you’ll never know what great things will come out of doing so.