A group of men go into a surgery; three never walk out. A few years before the invention of a reliable anaesthetic, Dr. Robert Liston performed a truly cutting-edge surgery.

“Time me, gentlemen,” was the last thing an unlucky patient heard before his deadly procedure began. Before anaesthesia was invented, quick amputations were the desired method. Less time spent sawing away at a patient’s bones meant less pain, and Dr. Liston was known to average quicker surgery times than all of his peers. This was definitely something to brag about in the 1800s, so at the start of every surgery, Dr. Liston asked to be timed.

However, being quick at surgery is not necessarily the best thing. Alongside the amputation came a high risk of infection–specifically, gangrene, which we can go into more gruesome detail about later.

Dr. Liston’s most infamous surgery took only two and a half minutes. The objective? To amputate the patient’s leg, and–this goes without saying–only the patient’s leg. Should be easy enough, right? Unfortunately, it wasn’t. While switching from the initial blade to the surgical saw, Dr. Liston slashed at an observing doctor’s coat. This doctor died nearly immediately from the shock, fear, and subsequent heart attack. As was the norm in the 1830s, while the patient thrashed around in pain on the operating table, it was the surgical assistants’ job to keep the leg steady. While one particularly unfortunate assistant was just doing his job, Dr. Liston accidentally sawed through his fingers as well. Both the patient and the assistant died of gangrene days later. So yes, this procedure took only two minutes and thirty seconds. But it also had a 300% mortality rate.

Gangrene refers to tissue death caused by either inadequate blood flow or bacterial infection. For Liston’s surgery, the latter was the most likely cause of the patient’s and assistant’s fatal afflictions of gangrene. Today, however, gangrene is treatable and thus rare in occurrence.

Gangrene also comes in two main forms: dry and wet. Dry gangrene is caused by poor circulation and most commonly affects the hands and feet of diabetics, as a major symptom of diabetes is limited blood flow to the extremities. On the other (amputated) hand, wet gangrene is characterized by infection. When foreign bacteria enter the body, they multiply and damage the healthy cells. The body’s automatic immune response causes swelling, which limits blood supply to the affected area. This specific type is “wet” because of the pus that can ooze from blisters on inflamed skin (sorry). For those who aren’t faint of heart, try googling gangrene and seeing the symptoms for yourself! Warning: only do this if you can really, actually, truly handle it. Reader beware.

Gangrene causes cell death; the skin can turn blue or black and develop leaking sores. Gangrene can also cause septic shock, in which the infection spreads to the rest of the body. While in septic shock, the blood pressure and the rate of cellular metabolism throughout the body plummet. It is potentially fatal.

To treat wet gangrene, antibiotics can be taken orally or by injection to kill bacteria. Additionally, the dead skin can be surgically removed and replaced with healthy skin tissue harvested from other sites of the body. The worst case scenario involves amputation of the affected extremity. 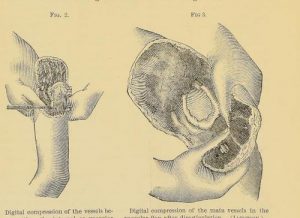 A relatively tame schematic dealing with amputations. If you were a med student studying under Dr. Liston, this is what you would have learned from. (Source)

And amputation is how Dr. Liston’s patient ended up in his unfavorable situation in the first place.

Amputations were such a common procedure during the time of Liston’s failed surgery because they were seen as the solution to many physiological problems. Today, amputations are mostly performed in order to remove a limb containing a disease, infection, cancerous cells, or one affected by a serious injury.

Dr. Liston’s failed surgeries include a few more aside from this particular amputation with the 300% mortality rate. Liston once accidentally amputated a male patient’s scrotum along with the intended target, his leg. Another time, Liston falsely believed a young patient’s aneurysm of the carotid artery was just a skin abscess, a protrusion on the skin filled with pus. Liston was so confident, he immediately tried to drain the “abscess.” Dr. Liston slashed at the patient’s throat, resulting in his death from major blood loss. 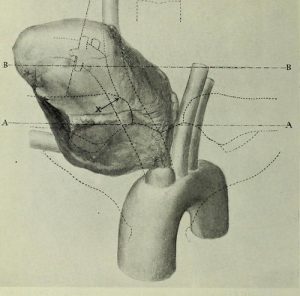 This is what a carotid artery aneurism looks like from the inside. Fun fact! You can actually go see Liston’s patient’s carotid artery on display at the University College Hospital in London. (Source)

Despite all of these transgressions, Liston was a highly sought-after surgeon. As anesthesia was not available, speed– which translated to less time suffering at the table–was the name of the game. Liston also prided himself on treating patients that other surgeons would not, namely those who seemed too ill and beyond medical help. However, Liston was even famous for his actual, positive achievements–like being among the first surgeons to operate on a patient who was under anaesthesia.

History has come a long way since the rapid amputations of the 1800s. Today, instruments are sterilized, anaesthesia is administered, and physician’s assistants are no longer required to physically restrain their patients at the sacrifice of their extremities. Hopefully, Dr. Robert Liston’s world record for the most deaths as a result of a single surgery will never be surpassed.