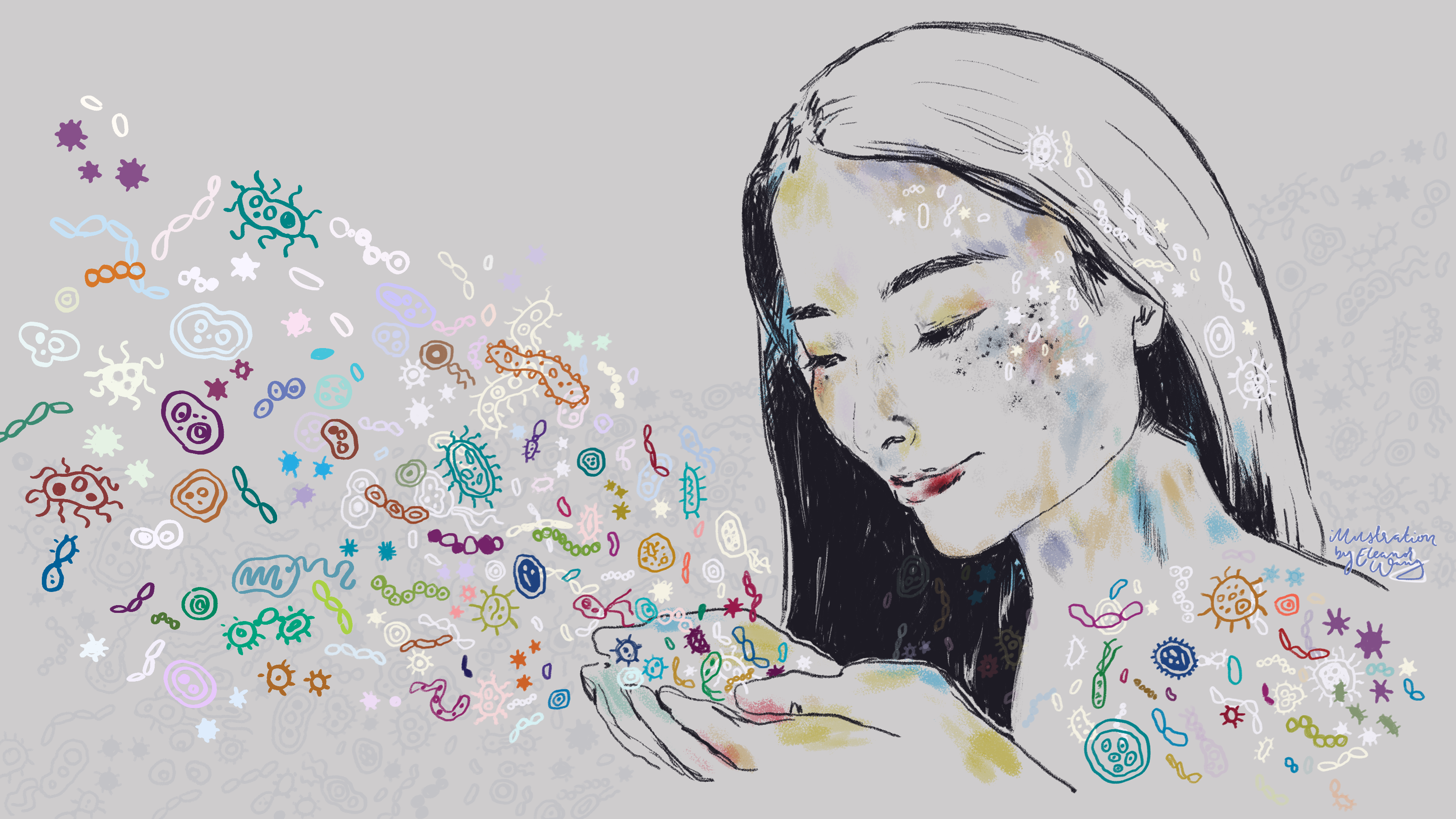 Should we be PRObiotic or ANTIbiotic?

Whether you’re a biology major or not, you’ve probably heard about something called the microbiome—or have at least heard of antibiotics and probiotics. The microbiome refers to tiny microorganisms that inhabit a specific environment. For instance, UC San Diego’s BILD 4 class (Introductory Biology Lab) looks at soil from the Scripps Coastal Reserve and analyzes the biodiversity of its microbiome. But aside from the external world, microorganisms in our bodies outnumber human cells ten to one. Wait, what? We’re only really 10% human? If you want to put it that way, I guess so. (Microbes are a lot smaller than human cells, so in terms of volume, we’re still mostly human).

It is essential to consider the significant roles our microbiomes play in our well-being. Products that we use in our daily lives, such as probiotics and antibiotics, very directly influence the composition of our microbiome. Antibiotic resistance is a critical issue, but antibiotics are still widely applied to combat disease and infection. Probiotics in foods such as yogurt and kombucha are supposed to improve our digestive health. But what do we really know about the microbiome right now? How do these products influence our health? Should we be more cautious about what we’re putting in our bodies? In essence, should we be probiotic or antibiotic?

In hopes of finding an answer to some of these questions, I will first discuss some of the exciting research that has gone into studying the human microbiome, then move on to specific products that target the bacteria in our bodies. For a brief introduction to the human microbiome, NPR’s 2013 video titled “The Invisible Universe” discusses the role that our microbiomes play in our health. However, it has been over half a decade since this video was made and science moves fast. So where are we today?

What we know about the human microbiome is that there exists wide, wide, variability in microbiome composition between different people, within one person over time, and even in different parts of our bodies. We know that our microbiomes play a big role in overall health and well-being, as well as our ability to fight disease. We have “good” microbes that help us stay healthy and “bad” ones that can take a toll on our bodies. Microbes interact with our immune, endocrine, and nervous systems, influence our ability to combat pathogens, manage our hormone levels, and modulate the fundamental physiology of our bodies. Analyses of the human microbiome have correlated changes in microbiome composition with a wide array of illnesses ranging from digestive diseases to cancer and clinical depression. Advancements in DNA sequencing and analysis technologies have drastically improved our ability to comprehend the functions of the microbiome, providing promising prospects for designing and engineering new treatments for personalized medicine. As one example, fecal transplantation is being developed as a method of treating an often fatal condition called Clostridium difficile colitis, a major complication of antibiotic therapy.

Our understanding of the microbiome continues to expand, but studying it can be difficult. There are thousands of bacterial species in each individual person, varying in different parts of their body. Bacterial species aren’t just diverse in number—each species has roughly 2,000 genes. So if, for example, there are 1,000 unique bacterial species in one human microbiome, our body would contain an estimated 2,000,000 bacterial genes: 100 times the approximate 20,000 genes in humans. Given the amount of difficulty we have in understanding the human genome alone, taking our microbiomes into consideration adds another dense layer of complexity to studies of human health. Furthermore, the number “1,000” only encompasses bacterial cells and doesn’t factor in other microbes like algae, fungi, viruses, and phages.

With all the factors that influence the composition of the human microbiome and the complex relationships between our own cells and microbes, it is difficult to establish causal relationships. A few broad determinants of microbiome composition include genetics, immune responses, location within the body, diet, antibiotic use, and overall lifestyle. Applying knowledge of the human microbiome to develop more efficacious and personalized therapies requires a thorough understanding of the underlying mechanisms behind human-microbe—or host-pathogen—interactions.

Our microbiome is pretty amazing, but it’s also highly complex and mysterious. Scientists are continually working to uncover the secrets behind microbiome function in human health and disease. Their discoveries have promising implications for the way we approach disease and design drug treatments. Bacteria are even being engineered as tools for diagnostics and therapeutics. Some of the biggest names in research on the human microbiome and host-pathogen interactions are actually right here at UC San Diego:

Rob Knight is the founding Director of the Center for Microbiome Innovation. He is also a Professor of Pediatrics and Computer Science & Engineering at UC San Diego and co-founder of the Earth Microbiome Project, the American Gut Project (which claims to be the “world’s largest crowd-funded citizen science project in existence”), and the company Biota, Inc.. His lab conducts research on the microbiota of humans, animals, and the environment, and even for applications in forensic science.

Janelle Ayres, an Associate Professor at the Salk Institute for Biological Sciences, studies host-pathogen interactions with the goal of working together with beneficial microbes to fight infectious disease. She has won several awards, including the Blavatnik National Award for Young Scientists, the 2018 NIH Pioneer Award, and awards from the NOMIS Foundation and the W.M. Keck Foundation for her innovative approach in developing “novel therapies beyond antibiotics and antivirals.” Rather than asking, “How do we fight infections?”, Ayres asks, “How do we survive infections?” In a report from The San Diego Union-Tribune, Bradley J. Fikes writes, “her angle is unconventional: Instead of viewing people and infectious bacteria as mortal enemies, Ayres looks for evidence of cooperation, or at least tolerating each other. This evidence can lead to new therapies to help people through infections.”

Other exciting work on the human microbiome also includes using microbes themselves to deliver therapeutics. Bacteria interact closely with our bodies, responding to a range of diseases. Scientists are working on engineering “smarter” bacteria that can detect signals in our bodies to deliver drugs in a disease-specific context and to specific regions of the body that may not be accessible through traditional drug delivery methods. For example, they can even be targeted into the middle of a tumor. Some drugs degrade in our stomachs and bloodstream before they reach the desired site of treatment, and bacteria can be used as “vehicles” to deliver these more fragile therapies. Bacteria can also be engineered to activate our immune systems in novel ways. They can even be used as diagnostic tools to record signals in our bodies, such as inflammation and other disease markers.

Now that we’ve acknowledged a few intriguing microbiome research projects, let’s take a step back to address the title of this article. What do we know about antibiotics and probiotics, and how does this all fit in to newly developing technologies and expanding knowledge of microbiology?

An antibiotic is a type of substance that acts to inhibit the growth and replication of bacteria, or acts to kill bacteria. Antibiotics are typically designed to treat bacterial disease and fight infection, but they are also frequently used in biology labs. Notably, antibiotics cannot be used to treat viral diseases, as they only operate against bacteria. Antibiotics range in strength and in mechanism of action; for example, some work by blocking cell wall synthesis while others work by preventing bacteria from replicating their DNA. One problem, however, is that antibiotics don’t necessarily know how to distinguish between “good” and “bad” bacteria. So when you fall ill through a bacterial infection, you might be given a strong broad-spectrum antibiotic, which acts on a wide range of bacterial species (as opposed to narrow-spectrum antibiotics, which as the name suggests, are specific to certain types).

Excessive use of antibiotics during early development can often hinder a child’s immune system well into adulthood. Much of our microbiome composition is established during the early years of life. As mentioned earlier, “good” bacteria interact with our immune systems to help our bodies understand how to fight infectious disease. Antibiotics, especially broad-spectrum ones, can sometimes cause negative side effects depending on the patient’s microbiome. The same antibiotic will affect particular microbes differently depending on the composition of the microbiome as a whole, as microbes themselves interact with each other in response to antibiotics.

Additionally, antibiotic resistance is a rapidly growing concern. As we continuously apply antibiotics to treat infectious disease, harmful bacteria that would have been previously killed are now evolving to survive against antibiotics. This calls for a need to develop new methods to treat bacterial infections that will not exacerbate the issue. But this does not mean we should completely stop taking antibiotics for fear of undesired side effects or of antibiotic resistance. Scientists are hard at work building new methods to fight infectious disease, but in the meantime, we can use antibiotics for our bacterial infections—they’re effective! We just need to be wary of using them excessively, or in the wrong context. But if your doctor prescribes you antibiotics, complete the course! Bacteria that are only slightly resistant to antibiotics will succumb, but not if you don’t finish the prescription. Failing to complete the course of antibiotics can lead to the propagation of antibiotic resistant bacteria.

Probiotics aren’t actually the antithesis of antibiotics. They are live microorganisms that are intended to provide health benefits when consumed. Popular probiotic-rich foods include yogurt, kimchi, and kombucha (side note: Roger’s Market and the Village Market now have kombucha on tap!). As mentioned earlier, bacteria-host interactions vary widely across different people, so it can be unpredictable whether probiotics will be beneficial to overall health. Probiotic supplements contain a variety of friendly bacteria species like Lactobacillus and Bifidobacterium. Supplements are designed to prevent or treat digestive problems, allergies, oral health problems, and other conditions. Much of the research done on the benefits of consuming probiotics, however, is somewhat inconclusive. Probiotics are not all alike, and everyone’s body responds differently to them. In terms of safety, people who are generally healthy will rarely experience side effects aside from mild digestive symptoms like gas. However, people with severe underlying medical conditions may be prone to serious infections. This is particularly dangerous in critically ill patients, sick infants, and immunocompromised individuals.

Organisms as seemingly small and simple as microbes are, in reality, far more complicated than we could imagine. My seemingly long article provides less than a snapshot of the fascinating world of microbiology. (If you want a taste of more, I recently read Gut: The Inside Story of Our Body’s Most Underrated Organ by Giulia Enders. It’s an International Bestseller and presents its content in a wonderfully fun and informative manner!) Much work needs to be done to break down the mechanistic functions of the human microbiome. However, new and exciting discoveries offer novel avenues for designing better treatments for disease, and help us understand a little more about how the world around us and inside us operates.