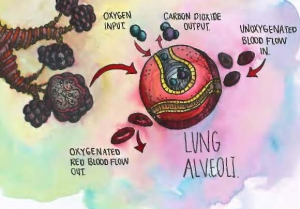 “Are you a believer?”

It was some time past five o’clock in the morning. The cold was somehow still managing to seep through the layers of blankets and my sleeping bag, and I had no clue what was going on.

“Are you a believer?” he asked again. From the top bunk, I could see my friend, Sachi, standing in the doorway and past her, the dark outline of the hostel owner.

“Sure…” she said, clearly uncertain like the rest of us, all now groggily awake and peering through the bunk beds to see what was happening. We were all exhausted, barely able to comprehend our hostel owner as he explained to us that he was a shaman, there to “take out the evil spirits” in our friend.

I had returned earlier that day to the San Pedro de Atacama desert with some fellow gringo friends from a four-day adventure in the high plains and salt flats of Bolivia. As soon as we reached San Pedro, the trouble began.

Two of our friends, Sachi and Estrella, began to complain about queasy stomachs, but we all chalked it up to the unidentified meat skewers we had bought from a street vendor. Hours later, though, when they had already vomited everything they possibly could, we knew the problem was more serious than food poisoning-especially since the rest of us, who’d eaten the same questionable delicacies, were feeling relatively fine.

It wasn’t until days later that we discovered the true culprit: reverse altitude sickness. 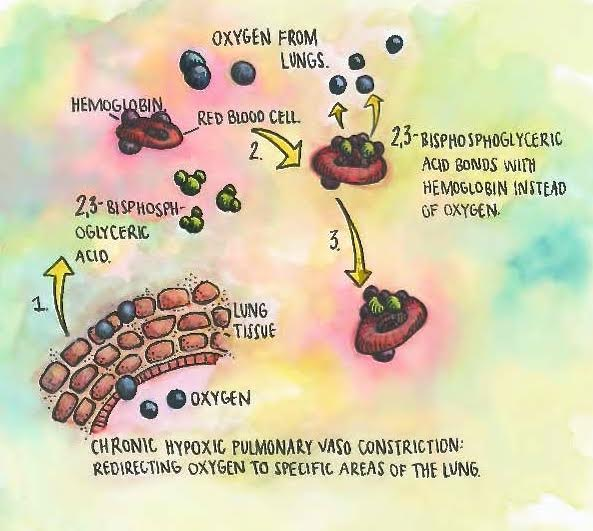 As many well-traveled people know, altitude sickness is common when, surprise, one changes altitude dramatically, traveling from low to high elevation, and is characterized by this handy equation: Vgas=(A/T)Dk(P1-P2)

*(Vgas is the diffusion rate, A is the area of the lung, T is the thickness of the lung membranes, and P1 and P2 are the differences in partial pressure of any gas)

What this means, in case you don’t speak equation on the daily, is that with a rapid change in altitude, the pressure differences for oxygen and carbon dioxide are no longer at equilibrium. The intake of oxygen, which is thinner at high elevations, is lower than the output of carbon dioxide, creating an imbalance in the diffusion through the alveolar membranes of our lungs.

This imbalance can put all things out of whack: it increases the erythropoietin in our system, which increases hematocrit and hemoglobin in the blood. In other words, increasing the amount of red blood cells that have yet to bind to oxygen in the circulatory system. It can also increase 2,3-bisphosphoglyceric acid production, which takes the place of oxygen in binding to deoxygenated hemoglobin. And it can cause chronic hypoxic pulmonary vasoconstriction. Try saying that five times fast. This refers to a severe contraction of the lung’s blood vessels and arteries, which limits blood flow as the body redirects the little oxygen received to better-ventilated areas of the lung. Basically the body’s efforts to make the most of what little it has.

The symptoms are not pleasant. Often, altitude sickness can resemble the flu or food poisoning with headaches, nausea, fatigue, dizziness, and shortness of breath.

Usually, it’s suggested that you take anti-altitude sickness pills as prescribed by a doctor. Or, as in our case, if you’re outside of the reach of Western medicine, try the locals’ way and chew coca leaves (from which Coca-Cola and cocaine are manufactured). However, the mechanism by which chewing coca leaves or drinking coca tea prevents altitude sickness is uncertain, and it’s more likely that you’re just convincing yourself it’s helping than the likelihood that its actually doing anything beneficial.

And no, you do not get a high from the leaves nor can you get addicted to them unless you thoroughly enjoy the taste of bitter dirt and the feeling of tiny leaf bits stabbing your gums. Not likely.

Previously in our trip we had gone up in elevation more than 16,500 feet, within a the timespan of a few hours, so we were all well-acquainted with the symptoms of altitude sickness. We had woken up in a hostel in the middle of the Bolivian salt flats with splitting headaches, as if there were balloons being blown up in our sinus cavities, and shortness of breath that left us winded after jogging just a few yards to our Jeep. This we had anticipated, hence the coca leaves.

What we did not expect was the reverse: that traveling from high elevation to low, we would experience a similar effect.

Reverse altitude sickness is lesser known than regular altitude sickness, but, as evidenced by our friends’ suffering, it is a very real affliction. The best explanation that doctors have for why only some people suffer from reverse altitude sickness, while others do not, is that those afflicted must be a bit, well, different. And by different I mean they probably have an irregularly formed vestibular apparatus (the snail-looking, curly thing) in their inner ear. With a sudden change in air pressure those with this irregularity cannot stabilize the pressure enough, causing inflammation and disrupting the body’s sense of equilibrium.

Only this time, the equilibrium isn’t between the diffusion of oxygen and carbon dioxide in the lungs as seen earlier but in the imbalance of pressure in the inner ear canal: lower pressure outside and higher pressure inside.

Unfortunately, at the time of our friends’ suffering, we weren’t even aware that reverse altitude sickness existed. And so, after several failed attempts to cure them — including coca leaves, aspirin, lemon juice, and some mysterious herbal tea — we watched with our fingers crossed as our hostel owner/shaman lit a bundle of newspaper and placed it in Sachi’s hands, the sicker of the two afflicted in our group.

The flames burst alive and lit their faces in the night, the shaman whispering words I couldn’t hear as Sachi breathed in the smoke from the burning papers. The rest of us watched in silent awe, and then it was suddenly over.

“You are cured now,” he said. “I have drawn the evil spirits from you. You shall not be sick again.”

And then he was gone, and we all returned to bed, each of us not quite sure what had happened but hoping it had worked nonetheless.

She threw up an hour later.

Luckily, though, by the afternoon of the next day, the worst seemed to have passed, and our friends’ illness subsided, which we can only assume were the result of their bodies finally adjusting to the new atmospheric pressure and reestablishing equilibrium in their systems.

So, shamanistic cures? Probably not real. But reverse altitude sickness? The proof of that is in the stains on the bathroom tiles of a little hostel in the middle of the Atacama desert.