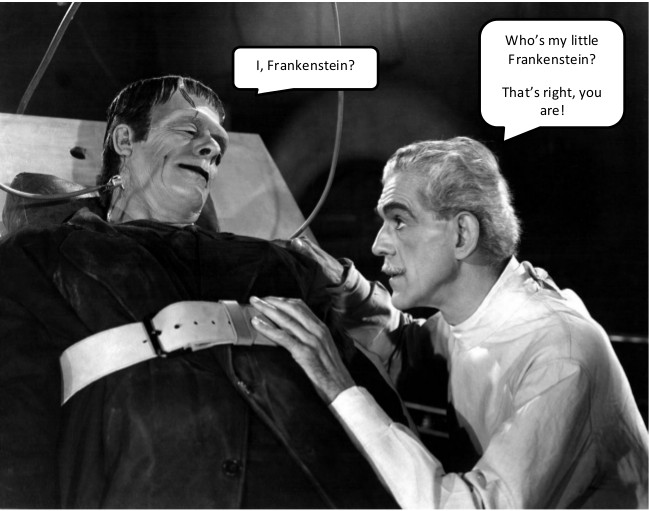 Me, Lexie. This movie, dumb. From the trailers, I could tell this movie was going to be bad, but I mentioned last week that I was going to talk about head transplants. Nothing beats Victor Frankenstein for talking about questionable surgeries on the human body, but remember that “Frankenstein” was the name of the creator, not the monster!

Since Frankenstein thought it a good idea to shock his creation with 1500 joules of electricity, let’s talk about what happens when you get shocked. In order to better think of the electrical forces on your body, we have to think about bioelectric circuits involving ATP and electrolyte concentrations. These electrolytes are charged particles (ions) that form an electrical gradient or transmembrane potential that is maintained by ATP-driven pumps. Jabbing a fork into an electrical socket damages biological tissues (I speak from experience) in at least two ways: Joule heating and electroporation. Joule heating is a burn resulting from the passage of electrical current through tissue; the burn originates throughout the tissue affected, so even proteins and DNA may denature. Electroporation is the disruption of cell membranes resulting from the change in potential as electrolyte transfer rips apart cells.

Ok, let’s say that I had died when I zapped myself. What then? In hospitals, they always look for clinical death (when your heart stops), but defibrillators can restart the heart. The point of no return is called biological death, which occurs four to six minutes after clinical death as the brain cells start dying from lack of oxygen. Even though a person may die, the person’s cells may live on. For example, Henrietta Lacks’s (1920–1951) still-cultured cells continue to divide, but she is no Frankenstein’s monster. The lack of oxygen is problematic because cellular energy is dependent on glycolysis (the breakdown of sugars) to generate ATP. Paramount to the final synthesis, oxygen acts as an electron acceptor, and without it, ATP could not be synthesized in the bulk that a cell

Reanimation seems like a distant possibility, but a neurosurgeon in Italy says he might find use for my body. In 1970, Robert White was able to attach a monkey’s head to the body of another, but since the technology to reconnect the spinal cord did not exist, Frankenmonkey was quadriplegic and shortly expired. Sergio Canavero suggests the use of fusogens, membrane fusion substances, could be the missing piece for head transplants (or body transplant depending on how you look at it).

I’m pretty sure I need one, but someone else needs it more than I do. The writers of I, Frankenstein certainly need brain transplants. The movie was a massive box office bomb. Demons versus gargoyles using magic with science? Bad movie and bad acting: don’t watch  it.