Lucy: Written by an Australopithecus

Tuesdays at my local drive-in are super cheap: $5 for two movies. Between Lucy and The Purge: Anarchy or Planes: Fire & Rescue and Dawn of the Planet of the Apes, I thought staring at Scarlett Johansson for an hour and a half would be better than another Disney spin-off of the only Pixar movie I never liked. Bad decision on my part, because not only was Lucy cringeworthy, but now I might never get to see some monkeys fighting. 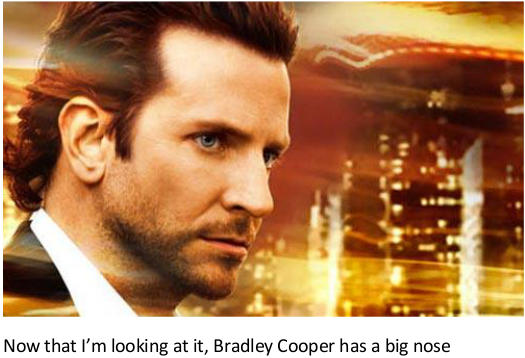 movie just like it before. Remember 2011’s Limitless? It was another movie in which a sexy person (see left) takes a magic drug to make himself smarter. Limitless was a much better movie because it showed a realistic (albeit hot) man turn his life around in selfish ways before making the world a better place. Am I still talking about other movies? Lucy can’t even keep my attention when it’s my job.

Alright, so it isn’t Lucy’s choice to take this drug called CPH4; instead, it’s

surgically implanted and starts leaking after a guard kicks her. In a series of cuts to Professor Norman (Morgan Freeman), he explains (incorrectly) that humans use only 10 percent of their brain, whereas dolphins use 20 percent, and someone who increased that percentage might be able to echolocate just like dolphins. Dr. James Kalat’s Biological Psychology suggests that the misunderstanding of local neurons in the ‘30s is likely the origin of this myth. Every day, you use 100 percent of your brain through various processes, says Dr. John Henley in Scientific American. In any case, Lucy’s magic drug increases her supposed brain capacity to 20 percent, so she gets superpowers. She begins to levitate and takes down a bunch of armed guards because that is more convenient for the writers than high-pitched clicks.

Yep, it’s that kind of movie, so I put on my suspended-disbelief hat and waited for the end. Knowing that a leaking bag of drugs is probably not going to be covered by her health plan, she resorts to paying with bullets and makes the doctor explain what CPH4 is.

I met with my biochemistry professor, Dr. Immo Scheffler, and asked if he’s ever heard of CPH4. Dr. Scheffler said that the pharmacological industry often uses simple letters-and-numbers naming that no organic chemist would use, so he cannot attest to the authenticity of this magic drug. However, Dr. Scheffler said that only one carbon, one phosphorus and four hydrogens are unlikely to cause such a response in humans.

So this real drug, which is totally real, eventually gives Johansson godlike powers and turns her into a flash drive or something. I don’t remember; I was too busy trying to figure out the dialogue to the ending of Planes behind me.