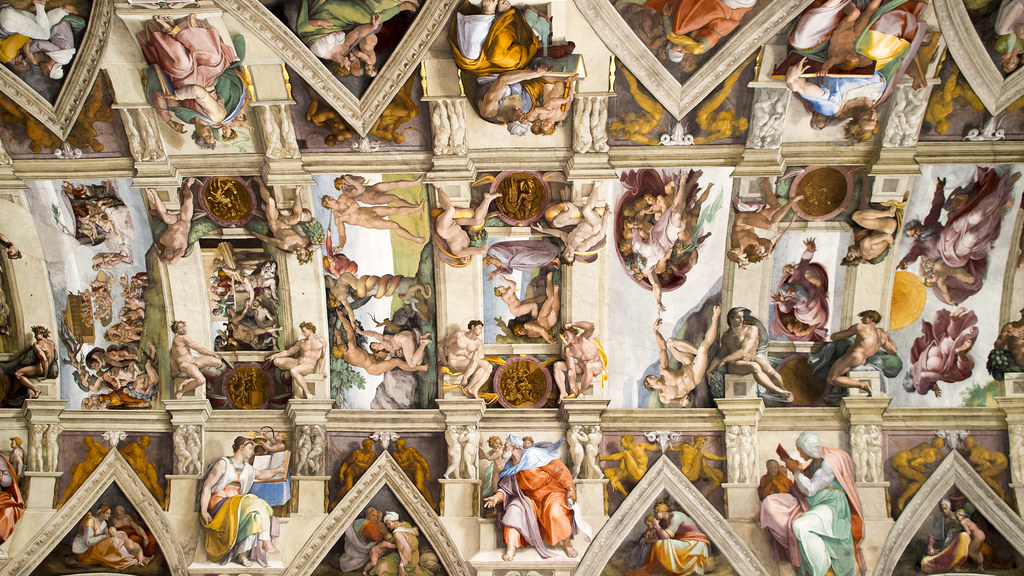 The Sublime Connection of Art and Science

The arts and the sciences have long maintained a tense relationship which has only escalated in recent decades. Over the years, many schools and institutions have cut art programs or been forced into defensive stances regarding the need for education about skills such as painting and sculpture. Despite this reductionary trend, an increasing number of contemporary studies are slowly shedding light on the brain’s responses to viewing art. Their findings illustrate a deep connection between art and the viewer that is linked to neural activity in diverse, unexpected portions of the brain. In essence, these neuroscientific experiments are shining an empirical spotlight upon artistic pieces, which is helping to expand their relevance and importance to the scientific world. Such studies are also aiding in the development of neuroaesthetics, a novel subdivision of neuroscience.

As its name suggests, neuroaesthetics is an area of study concerned with the scientific component of pleasurable experiences. It aims to provide biological explanations for reactions to certain external stimuli deemed to be aesthetic or beautiful. Because such encounters commonly occur, an understanding of their underlying mechanisms may shed light on other fundamental elements of human behavior such as communication. However, as neuroaesthetics is both an unusual and novel field, it faces scrutiny and even opposition. Many individuals are skeptical about the concept of measuring or quantifying beauty. Aesthetics, which has long been perceived to exist beyond the scope of empiricism (or rational and logical thought), has been primarily untouched by scientific experiments and procedures. Therefore, neuroaesthetics is ultimately seen by some as an attempt to bridge together two subjects that lack an inherent connection.

While the controversy surrounding neuroaesthetics may persist, practitioners of the field continue to make advances in studying interactions using art as an external stimulus. Many experiments specifically use paintings because they tend to provide the viewer with a predominantly visual experience that can then be analyzed and mapped to specific regions in the brain. To more fully comprehend and thus appreciate the results produced on the brain by paintings and art in general, it is imperative to first understand several key techniques used in the experiments conducted.

The vast majority of studies that aim to show a connection between paintings and increased brain activity utilize a mapping technology known as functional magnetic resonance imaging (fMRI). This contemporary technique is a recent form of technology derived from magnetic resonance imaging (MRI). MRIs utilize two magnets that produce two distinct magnetic fields. These fields cause regions of the brain to emit a faint sign known as the magnetic resonance (MR) signal. This sign is a distribution of charges that can generate an MR map which illustrates changes to brain structure. The MR signal is similarly utilized by fMRIs to look at blood flow in the brain. Increased blood flow to regions of the brain can be correlated with increased neural activity in those same areas, thereby allowing fMRI scans to detect intensified brain activity. Through this connection, fMRI scans can accurately chart the brain’s reactions to a variety of external stimuli, thereby effectively mapping brain function rather than structure.

Much like an fMRI, transcranial magnetic stimulation (TMS) also measures brain activity. During TMS, a magnetic pulse is delivered to the brain through an electromagnetic coil placed upon the subject’s scalp. The pulse is designed to stimulate the portions of the brain responsible for depression and mood control and recently has been found to alleviate depression. TMS has been championed as a possible treatment course for depression, though in the study of art on the brain, it is only used to map activity of brain regions, particularly those concerning mood.

In order to study the effect art has on the brain, neuroscientists compiled data from 15 different experiments that charted brain activity in response to viewing paintings. The results were all produced from fMRI scans and involved tests with different types of paintings and individuals that varied across characteristics of age, gender, and ethnicity. In a technique called meta-analysis, these distinct experiments were essentially combined into one single test, with the results from each study compared to the outcomes of the other 14 tests, as though they had all been produced together. This allowed researchers to see which regions of the brain were excited in spite of differential experimental conditions. By using a specific type of meta-analysis known as activation likelihood estimation researchers were able to distinguish between actual identical activated regions and random similarities arising from experimental variation. The sections of the brain that are active across multiple experimental designs can indicate a general reaction in human beings to paintings and can also illustrate specific portions of the brain that perpetually respond to art.

Across the many experiments, there were multiple regions of the brain that displayed expected increased activity upon viewing paintings. As predicted, the visual cortex, which is responsible for processing external visual stimuli, showed such elevated activity. This increase can be traced to specific components of the visual cortex: the lingual gyrus, involved in analyzing vision and letters, and the fusiform gyrus, responsible for facial, object, and color recognition. The excitement in these regions is likely the result of shape, color, and categorization aspects that comprise a single painting. It is both predictable and rational to see the visual cortex’s activity increase because it is the primary section of the brain involved in viewing and interpreting visual effects, including paintings.

However, stimulation also occurred in unexpected regions of the brain. Aside from the visual cortex, fMRI scans illustrated excitement present in the brain’s anterior temporal lobe, a region responsible for semantic memory (the simple recollection of facts) and more importantly for integration and application of such information. This illustrates that the engagement of the viewer with a piece of art is deeper than merely a superficial recognition of objects or colors. It essentially supersedes the notion that art is only a collection of shapes and swatches and instead confirms a connection between art and levels of higher thinking. Two additional regions of unexpected stimulation were the anterior insula, which aids in emotional processing, and the putamen, which is traditionally activated by reward anticipation. Neither portion of the brain has an inherent role in visual stimulation, though both regions are involved in emotional responses. Viewing paintings has often been said to be an emotional experience and has even been characterized by subsequent feelings of reward. In this context, a connection between art and the emotional center of the brain begins to becomes apparent even though it may not be an immediately intuitive relation.

The most notable region of the brain that displayed raised levels of activity was the posterior cingulate cortex, which is an integral part of the brain’s default network. This system is often utilized at moments of low external stimulation, and its activation generally indicates internal thought processes and self-reflection.

To find that this network is excited by paintings, an indisputable type of external stimuli, is nothing short of phenomenal. The network’s activation suggests that looking at paintings triggers an inner and possibly reflective response directed towards the viewers themselves rather than the external cue the are staring at. This can reflect the surrealism or speechlessness some individuals experience when looking at paintings. Often times, it is difficult to explain exactly how one feels in relation to a work of art, but it is this very intricacy and delicateness that gives art its nearly universal appreciation. The ability of art to capture and display inner emotions, which in turn leads to a complex viewing experience, is presented here in the clearest of forms: paintings stimulate regions of the brain necessary for interface with the external world while simultaneously exciting a portion that is traditionally only active in times of low external excitation. Art therefore activates sections of the brain that, under normal conditions, are not stimulated together. This results in diverse and unique experiences when viewing art.

While this first analysis between art and the brain compiled many experiments, paintings, and individuals, a different study conducted on a much smaller test group with only one painting also yielded groundbreaking results. This study used Michelangelo’s famous Expulsion from Paradise, featuring Adam who has recently left the Garden of Eden. In the painting, his arm is outstretched in an attempt to defend himself from the sword of an unknown angel. However, Adam, in his shame, has averted his eyes downward for he is unable to meet the stare of his antagonist. His wrist is also bent towards his body, indicating his wretched, defensive state. 10 individuals were asked to look at this image and were then subjected to brain scans via TMS. The results showed increased activity in the primary motor cortex, the portion of the brain responsible for controlling the wrist (and other joints).

This is an incredible outcome that has many layers of interpretation. To begin, it illustrates that Adam’s defensive reaction is enough to trigger an identical response in viewers. In essence, it shows that a visual, aesthetic cue stimulates a physical reaction. This outcome can be attributed to mirror neurons in the body that generally evaluate actions and events. These mirror neurons were initially used for survival because they gave human beings the ability to see themselves in situations which were different from their current circumstances. This meant that individuals did not have to experience all affairs first-hand in order to perceive or anticipate them. Such an ability is applicable for circumstances concerning other individuals. In this case, mirror neurons give human beings the ability to place themselves in the situation of another and therefore experience the emotions and sensations of that other person. In a contemporary sense, this ability has empathetic underpinnings, as it allows humans to relate to each other without directly sharing an experience. In the case of Michelangelo’s painting, Adam’s bent wrist indicates his defensive and broken state to his viewers. In response, mirror neurons cause excitement of the brain region responsible for motion, prompting the viewer’s wrist to move like Adam’s. This development showcases the deep level of engagement viewers experienced when looking at the painting. It ultimately produces a mirroring response that perhaps indicates empathy with the subject Adam.

The two studies presented here reached their results through different types of experimental designs. However, they both indicate a connection between the viewer and art in the form of paintings that is much deeper than merely recognizing objects and faces. Each study illustrates that art has a strong and complex impact on the viewer, with the capacity to produce both self-reflection and empathy. These experiments also provide scientific reasoning behind individual reactions to art by demonstrating that specific regions of the brain were stimulated by paintings. The aforementioned experiments are just two examples of many tests that are in the process of linking perceptions of art to the world of science. This connection, between two traditionally adverse fields, may produce a beautiful and novel empirical understanding of human beings and their responses towards the aesthetic. Furthermore, because interactions with visually pleasing stimuli occur on a daily basis, understanding and quantifying human reactions to them may also elicit insight about the intrinsic nature of human behavior.