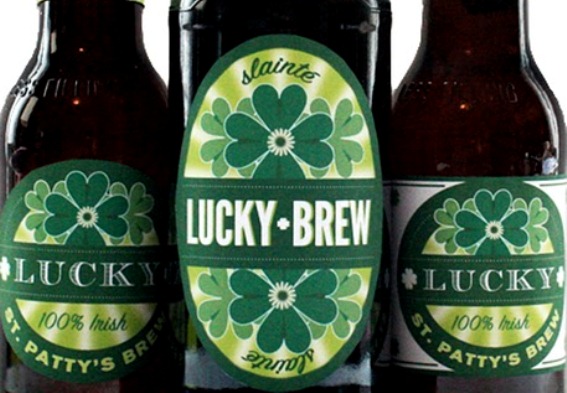 Saint Patrick’s Day is within reach as we embark on the last week of school before spring break; the signature Irish color of green begins to show up on people’s doorsteps and TV commercials. Those of you of legal age, do you plan on celebrating this holiday with some exceptional beer? Or are you one of those ultra-hipsters who brew their own beer? If not, are you interested in knowing how? Well, you’re lucky because we are going to talk about the science that goes into the creation of beer.

It is estimated that this year, 13,000,000 pints of Guinness will be consumed around the world on Saint Patrick’s Day¹. One of the most successful beer breweries in the world, Guinness is an Irish brewery originating in Dublin that has been brewing ale, stout, and beer for over two centuries². However, the existence of beer stretches far beyond our modern breweries; beer has for thousands of years been an essential beverage in human civilization. It is not just one of the oldest drinks humans have produced but also an integral part of many ancient diets because it is rich in nutrients³.

Beer is by definition any alcoholic beverage made from fermented cereal grain⁴. According to The Beer Academy, barley, hops, yeast, and water are the most common ingredients. Barley, the main ingredient, is low in fat and protein but rich in starch. Hops, on the other hand, are what give beer its signature bitter flavor. To give you some perspective on the ratio of barley to hops, a typical barrel of beer is made from about 20 kg of fermented grain/barley and 150 g of hops, so hops are pretty much used as a spice. Another integral part of brewing is yeast, a microscopic member of the fungus family. Yeast grows on sugar, and produces alcohol and carbon dioxide by fermentation. It is an extremely important part of brewing, and many brewers believe that yeasts are the secret to making their beer special. Now, you’re probably wondering how this all works. Hold on, we’re gonna get there, but first, let’s look at the brewing process⁵. 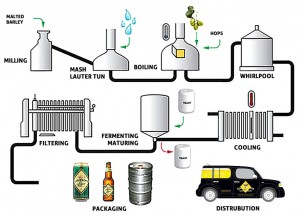 Before brewing can start, the barley is steeped in water that allows it to germinate. After this, the barley is broken down in a mill so that enzymes can reach the starch molecules during fermentation. Once the barley is broken down, hot water is added in a process called “mashing.” Consequently wort (a sugar-rich liquid) is produced. The wort is then transferred to the brew kettle, where hops are added, this is done by a boiling process that sterilizes the wort while the hops add bitterness and flavor to the beer. The yeast are then added to a fermentation tank where the beer (the mixture of liquefied wort and hop) is, and the beer ferments as the sugars are converted into alcohol. After this, the beer moves to a maturing tank, where it remains for various lengths of time depending on the style of the beer⁶.

Now, to the fun part: the magic of chemistry. What are the chemical compounds in beer? Hops, which add bitterness to the beer, contain organic alpha and beta acids. Most bitterness comes from the alpha acids; the aroma of beer also comes from the essential oils of hops⁷. On the other hand, Yeast obtain energy under anaerobic conditions (no oxygen needed) using a process very similar to glycolysis (chemical breakdown of glucose to lactic acid in your muscles) called alcoholic fermentation⁸. Alcoholic fermentation, a major process in brewing beer, begins with glucose, which will eventually break down into carbon dioxide and ethyl alcohol via a variety of enzymes, producing the liquid alcohol byproduct of fermentation that is beer⁹. It is important to note that alcoholic drinks act as depressants because it slows down the central nervous system, and can slow down motor coordination and intellectual performance. Once consumed, the drink enters the stomach and small intestine, where small blood vessels carry it to the bloodstream. Approximately 20% of alcohol is absorbed through the stomach and most of the remaining 80% is absorbed through the small intestine, according to Brown University’s Health Promotion Service, the liver can only process one ounce of liquor in one hour. So If you consume more than this, your system becomes saturated, and the additional alcohol will accumulate in the blood and body tissues until it can be metabolized. This is why having a lot of shots or playing drinking games can result in high blood alcohol concentrations that last for several hours.¹⁰.

It is amazing how common yet complex the processes of beer-brewing can be, If you are interested, I attached a YouTube video, “SCIENCE of BEER!!!” made by PBS. I hope you have a great Saint Patrick’s Day and enjoy lots of good beer if you are legal and stay safe!