I had been wading through the surf on the beach at the Scripps Coastal Reserve in La Jolla, California for almost half an hour when I found a cluster of sea stars in a tide pool. Large, smooth rocks slick with algae and sea spray created crevices where water pooled during low tide. I crept as close as I could and slowly dipped a hand into the water, which had been warmed by the day’s sun. The purple sea star was rough all over with tiny white dots, and it was not squishy like most people would imagine; it almost felt like the sea star was wearing a shell. 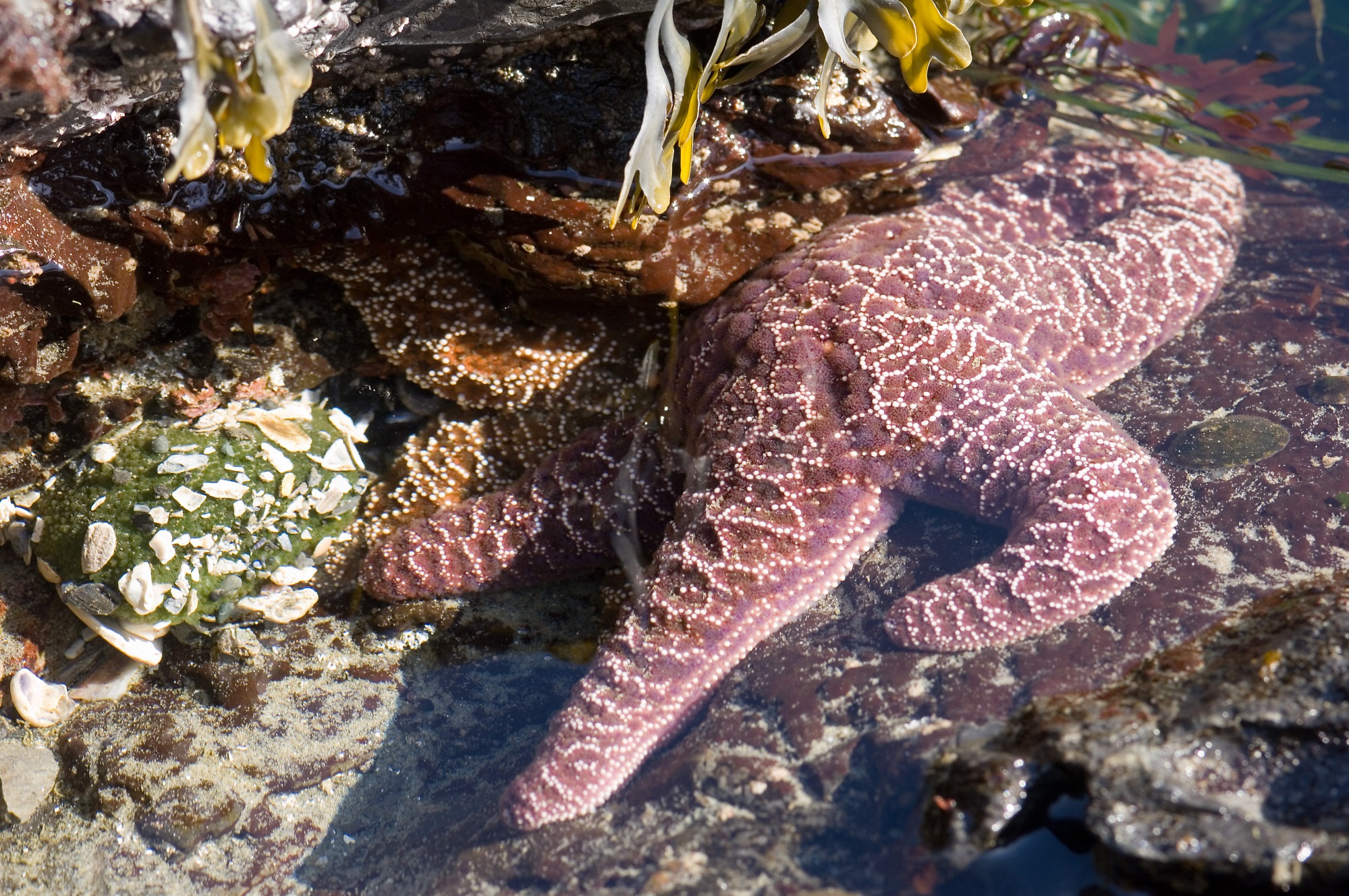 It turns out that many sea stars along the West Coast of North America do not look or feel like the ones I found in that tide pool. Instead, their hard protective exteriors are being replaced with white, decaying tissue that slowly encroaches across the sea stars’ entire bodies until all the tissue begins to disintegrate and become a white clump of mush. This gruesome death is caused by a disease called sea star wasting syndrome. It has recently been found that a densovirus is the driving cause of this disease. I had the chance to see some sea stars in various stages of the disease when I visited the Scripps Institute of Oceanography, where I spoke to professor and researcher Dr. Ron Burton. He told me that this virus has been found in sea star tissue collected back in 1942. Dr. Burton, who was referencing the recently published paper about sea star wasting syndrome, also explained that this virus has been present in the oceans and sea stars for a long time, but now something has caused it to trigger fatal symptoms in sea stars. Scientists are still trying to figure out what that might be. 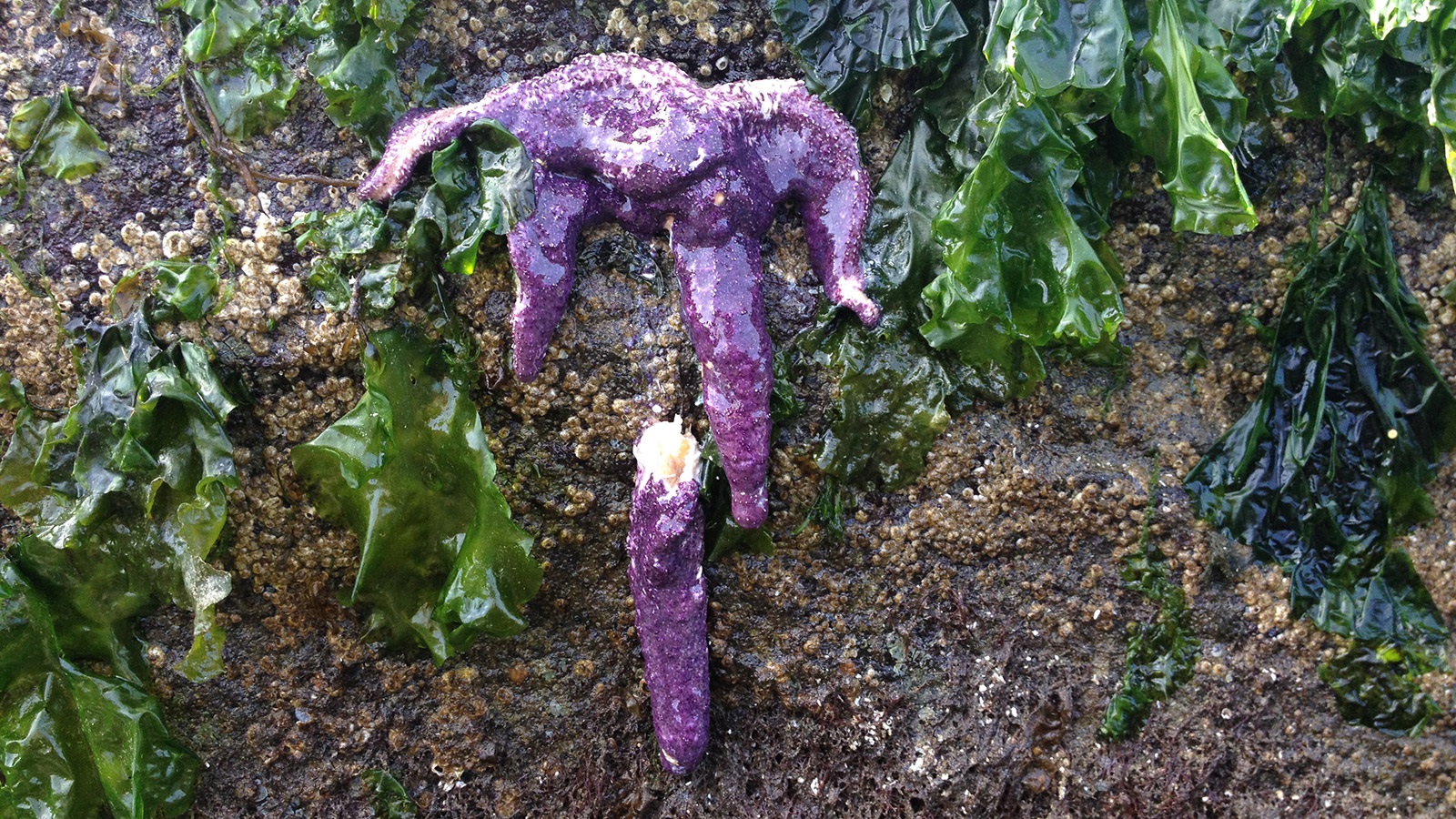 Six small cubical tanks sat against the wall of his lab, each containing a sea star that was in a different stage of the disease. One had patches of white slime on its skin, while another was barely recognizable as a sea star anymore – it was all white and falling apart like soggy bread. In two of the tanks, the stars were missing some of their legs, with white goopy wounds on the body where the limbs used to be. Dr. Burton explained that the virus has also been discovered in echinoderms other than sea stars, such as sea urchins but the spiny ball-like creatures have not been experiencing disease symptoms or mass mortality like the sea stars have. This could mean that sea urchins act as reservoirs for the virus, potentially infecting sea stars for many years to come. 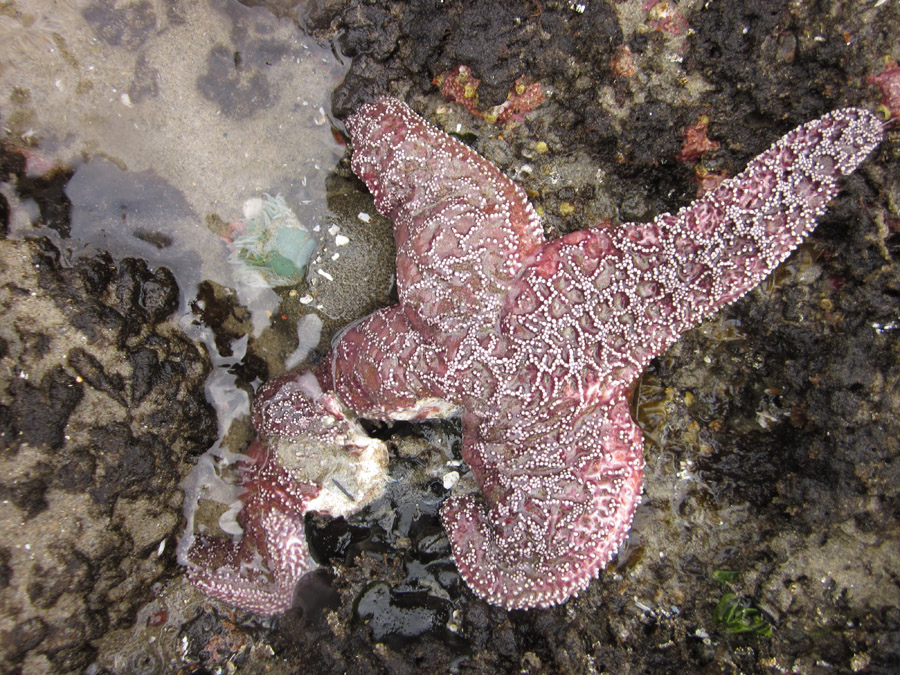 I wasn’t allowed to touch the wasting sea stars, but simply seeing the stark difference between the disintegrating individuals and any healthy counterpart was enough to send pulses of anxiety through my body. Sea stars are a keystone predator in many habitats (especially intertidal ecosystems), meaning their presence provides balance between the rest of the species living in that habitat. Dr. Burton’s example for me was if all the sea stars in an area were removed, snails (which sea stars normally eat) would thrive and eat up all the algae, and if there were no photosynthesizing plants in the water, there would be less oxygen available. Essentially, it would be like a domino effect where every fallen tile tilts the scales further from the natural balance. Therefore losing sea star populations along an entire coastline could lead to trouble further down local food webs.